This Vancouver-based physician is the oldest female to run 7 marathons within 7 days in 7 continents.

Dr. Chandra has run over 500 marathons and ultra-marathons, and is one of only 18 women in the world who is a ‘North Pole Grand Slammer’- one who has run marathons or longer races on all seven continents plus the North Pole.
Most of us find it very difficult to be motivated to wake up early and go to the gym. Often, we think that if we went once, that was enough to take the rest of the week off. However, for Dr. Pushpa Chandra, exercise is a passion that has become an extremely important part of her daily life. A naturopathic physician in Vancouver, Dr. Chandra has worked hard in providing medical care for over 27 years, while building her devotion towards running through numerous marathons and world-renowned races.
Growing up in a small village in Fiji, her association with running started from a very young age. She would run to school and save her bus fare to buy a Popsicle. “Running became enjoyable and effortless, because it was associated with some sort of reward from the very beginning,” shares Dr. Chandra. As she got older, the rewards started changing, and soon the ultimate reward became finding the true meaning of life by using running as a means of meditation. “In places where I ran to exhaustion like on Mount Everest, I continuously recited my mantras and continued running because I have the determination to finish. Here, running is a type of discipline that requires you to put yourself through pain for hours on end,” she says.

Dr. Chandra has run over 500 marathons and ultra-marathons, and is one of only 18 women in the world who is a ‘North Pole Grand Slammer’ – one who has run marathons or longer races on all seven continents plus the North Pole. Recently, in commemoration of her 60th birthday, she participated in the 2018 World Marathon Challenge aka 777, making her the oldest female to run seven marathons within seven days in seven continents.
Running has helped her gain many skills which are beneficial throughout her life. For instance, while taking part in the 250-kilometre race in the Sahara Desert, she quickly realized the challenges that came with being in a naturally dangerous place. “I had to be self-supporting – I was required to carry my own lodgings and had a GPS tracker given to me to self-navigate. Along with the extreme heat and hip-deep sand providing physical challenges, it became nearly impossible to convince myself that I could master this race,” she recalls. However, her in-built strength from participating in other marathons gave her mental, emotional and spiritual empowerment to achieve the seemingly impossible goal.

Beyond running, Dr. Chandra also believes in charity and is involved in raising money to help children get proper education. In fact, another major reason for the marathoner to sign up for the 777 race was to raise $30,000 in order to provide education to children in India. Having worked at BC Children’s Hospital for 22 years in critical care, she was very touched by the children she met along the way. This inspired her to start working with a charity based in India called Schools on Wheels, that aims at improving the quality of education for underprivileged children. According to reports, there are 1 million children sleeping on the streets of Mumbai, a million each in Delhi and Kolkata, and many more areas across the country where the same issue persists. “These children are often running away from home and end up on the streets because they are fleeing abuse, bad living conditions and extreme poverty,” points out
Dr. Chandra.
Schools on Wheels goes to the streets of Indian cities and gives children two and half hours of education per day through their bus, until they reach a level of emotional stability when they can be placed into a school. Celebrating her 60th birthday, Dr. Chandra has set a goal of placing 60 kids into the program, which already funds for 500 children. She works closely with Plan Canada, which overseas the work being done through Plan India and allocates funds to Schools on Wheels in a properly regulated way. 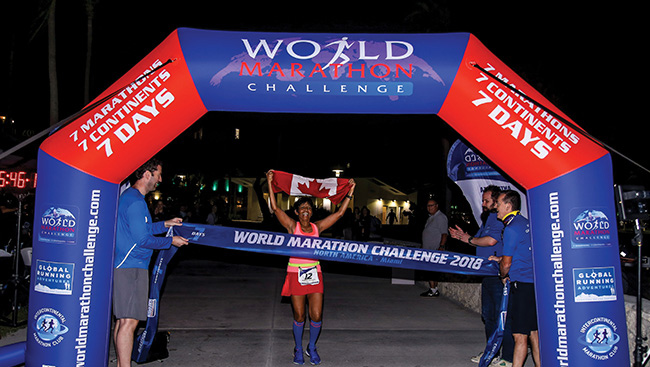 The 60-year-old is driven about providing education to children and helping them break the cycle of poverty. “I want people to realize that education is the intangible product that is the passport to a bright future, and is necessary for society in the most powerful way.” Her life being an excellent example, Dr. Chandra encourages young people to get involved in something they can make their passion, because “it will teach you skills about discipline, goal-setting, and confidence.”
Dr. Pushpa Chandra hopes that her story inspires others to be active and get involved in supporting a cause which can help the needy. She will continue to fundraise in order to reach her goal of providing 60 kids with a long-term education through Schools on Wheels. You can support her cause by donating through shiftworkershealth.com