As a native of Portmore, a large coastal city in southern Jamaica near Kingston, he was a prolific striker as a youth. Mattocks is the all-time leading scorer with 54 goals and 25 assists for Bridgeport High School in Portmore, Jamaica.

This included 18 match-winning goals for Bridgeport. As a youngster in Jamaica, we were intrigued to know what teams he followed and which players he idolized growing up. “My team is Liverpool and my
favourite player is Steven Gerrard, his leadership and quality has been phenomenal. In terms of strikers, I definitely look up to Ronaldo from Brazil because he was just fantastic and a class act,” he says. Mattocks was also the leading goal-scorer for the U-21 squad of Jamaican National Premier League outfit Waterhouse Football Club, who are based in the country’s capital of Kingston.

Mattocks was a two-year standout at the University of Akron in Ohio, and helped the Zips to the 2010 NCAA College Cup title as a freshman and went on to sign a Generation Adidas contract with MLS on December 20, 2011. He joined Whitecaps FC after being the second overall pick in the 2012 Major League Soccer SuperDraft in Kansas City, Missouri. Mattocks is a speedy striker who creates scoring opportunities with his hustle and quick feet, and has been an integral component of the club since his inception.

With the addition of Vancouver Whitecaps and 86’ers alumni Carl Valentine as the new skipper of the squad, we were interested to understand the changes in the 2014 team. “I think the biggest difference this year is the style of play, we want to play, we want to pass, we want to move and get behind teams. I think the confidence of the team is really good right now so we just got to keep those small things going,” Mattocks highlighted.

In terms of Mattocks’ personal development, we were curious to know what he had changed going into this season. “Mentally, coming into this season I feel you can’t take a single day for granted and every single day you have to give 100 per cent. I think that, will translate into the match and I’ve been doing that so far, and I think its been really good so I just got to keep doing that,” reflects Mattocks. 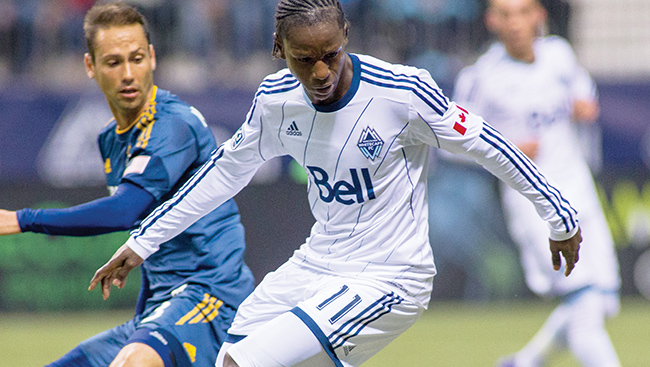 Before games, we were interested to discover what music Mattocks jams to in order to get into the zone. “Usually I used to listen to a lot of Reggae, Hip Hop, Dance Hall and mostly songs from Jamaica, but this season I don’t really listen to any songs before games, I just stay quiet a bit until game time,” he divulges.

Mattocks admits that he is a fairly reserved individual who stays in more often than going out in the Vancouver scene, he does like going to the beach in the summer, but mostly enjoys watching movies and catching up with family and friends back home in Jamaica. “I love to read, and I want to finish my degree and plan on taking online courses during the summer. I just want to focus on my career right now with soccer but I think I want to get my degree in marketing and then try to move on to law,” the intellectual striker shared.

With the FIFA World Cup taking place this year, we were very curious to find out which team Mattocks would be backing this year. “My team is Italy, that is always going to be my team but I think the favourites that everyone is probably going with is Brazil,Germany and Spain.” After the World Cup break, the Whitecaps will be back at it, as Mattocks and the squad focus on finishing the season strong and setting up a potential position in the MLS Playoffs.