By Shanel Khaliq, 21 Jul, 2015 11:38 AM
Four SFU students recently won a two-day long “appathon” which was organised by the Federal Government to invite software geeks and graphics lovers to develop an app using the public data provided by the Government of Canada.
Computer Science students – Jasneet Sabharwal, Jonathan Bhaskar, Bradley Ellert and Maryam Siahbani – came up with an app called “High School Down, Where Next?” that can help students compare tuition costs for universities across Canada. Their creation won them a $5,000 cash prize.
It so happened that Bhaskar and Sabharwal found out about the Canadian Open Data Experience (CODE) 2015 the day that it began. Sabharwal was driving home from his internship when he called up Ellert and Siahbani, and the four of them decided to team up and join the competition.
Data analysis being a strong suit for all of them, the idea of using open data to solve real-world problems excited them. Thus, the decision to sign up did not take much time and thought.
The CODE 2015 had set out three categories: youth employment, business opportunities, and healthy living. Since the four of them are still at school and so concerned with employment opportunities themselves, they decided on choosing the youth employment category.
The first 24 hours were spent brainstorming and sifting through the datasets released by the organizers (approximately 200,000 datasets). Being graduate students, the significance of post-secondary education for building a career was obvious to them.
Analyzing information from the vast variety of datasets available showed that a post-secondary education lands one a 20 per cent better chance of getting employment and on an average a 75 per cent chance of landing a better salary. “Hence we decided to develop an app that would tackle the problem of finding a post-secondary institute for a high school graduate based on his monetary constraints.
The following 24 hours were spent in cleaning the data and creating the app,” shares Sabharwal. Ellert spent most of his time cleaning the data for the team to use, while Maryam was involved in brainstorming. Sabharwal and Bhaskar were involved in developing the visualizations and aesthetics of the app.
Choosing a university program quickly became the focus of their app. “Most of the competitors in the market create visualizations that only allow one to compare a few institutions at a time. Given the fast pace of today’s world, we wanted to be able to display all the information at once. This also helps reduce information overload,” explains Sabharwal.
The app shows a map of Canada displaying all the post-secondary institutions in the country, besides which is a list of institutions in each province. Then there is a map that shows all the programs offered by each institution. The programs are colour coded based as per the cost, so the darker the red, the more expensive the institution is. Alongside, the average rent is also shown depending on where the institution is located. There are also two bar charts to help filtering based on tuition and housing rent.
“The novelty of our app is that even chart and visualization can be used to filter the data. If a student has an idea on what he wants to do, then he can start directly by choosing the program and then filtering further based on his monetary constraints. Whereas, if a student only has the starting preference of the area or province he wants to live in, he can start from there, and then further filter down based on his criteria,” points out Sabharwal. 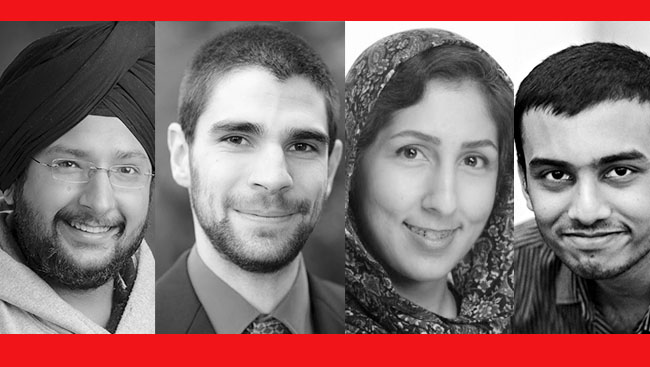 The app is now available online at sfu-data-crunchers.