One Winter Storm Passes Another Looms As Warnings Posted On B.C.'s South Coast

VANCOUVER — Thousands of students across much of Vancouver Island and parts of British Columbia's south coast were off school Monday as the region recovered from a winter wallop and prepared for another.

Schools in Greater Victoria, the Gulf Islands and Comox didn't open following weekend storms that blanketed some parts of the Island with as much as 40 centimetres of snow.

A number of schools on the mainland, including the Sunshine Coast, Surrey, Langley and Mission, were also shuttered, along with the University of the Fraser Valley in Abbotsford and Vancouver Island University in Nanaimo.

People were still digging out Monday from the weekend storms that brought heavy snow to Vancouver Island and howling arctic winds to parts of the south coast.

Environment Canada has issued another snowfall warning for the entire inner south coast including Metro Vancouver, excluding Howe Sound and the northern tip of Vancouver Island.

"A long period of snowfall with total amounts of 10 to 15 centimetres is expected," said the weather office, which predicted the snow would begin Monday afternoon and continue into Tuesday.

"This second disturbance will spread snow to virtually the entire south coast with heaviest amounts falling (Monday night). Total snowfall amounts will vary across the region with 10 to 15 centimetres falling in most areas with somewhat higher amounts possible on Vancouver Island."

An arctic outflow warning was lifted for Howe Sound, but remained posted for the Whistler area as extremely strong outflow winds were forecast to continue Monday night, creating windchill values expected to be near -20.

Ferries were running Monday, although BC Ferries tweeted that snow delayed the first departures of several smaller vessels as crew members struggled to reach the terminals, while the decks of other ships had to be shovelled before loading could begin.

Arrivals and departures were close to being on schedule at the Horseshoe Bay terminal in West Vancouver on Monday. Clean up continued at a neighbouring marina where numerous small boats were damaged or sank during a powerful windstorm on Saturday.

The storm forced the closure of the ferry terminal for several hours because of damage to a breakwater and the amount of debris in the water. 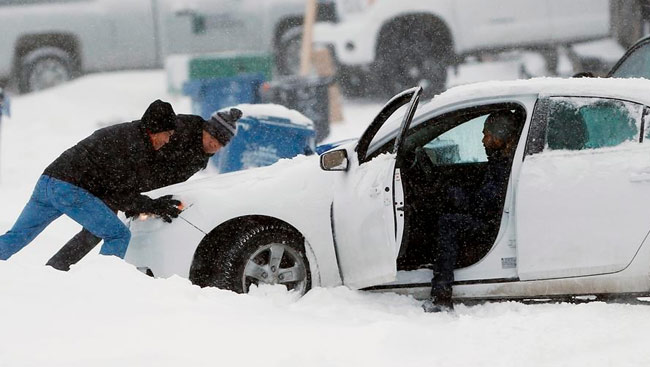 Thousands of BC Hydro customers were without power during the height of the weekend storms, but the utility website showed just over 1,000 customers were still affected by midday Monday. Many were expected to have their electricity restored within hours.

B.C. Limiting Use Of Duelling Experts In ICBC Injury Claims

The Provincial Government Is Implementing New Limits On The Use Of Duelling Experts In Icbc Injury Claims As It Continues Working To Fix The Public Insurer'S Troubled Finances.

B.C. Limiting Use Of Duelling Experts In ICBC Injury Claims

Thousands In Southern Bc Still Without Power Following Massive Windstorm

VANCOUVER — More than 11,000 customers were still without power in British Columbia on Sunday following a windstorm.

Thousands In Southern Bc Still Without Power Following Massive Windstorm

British Columbia may be famous for its bud but some say Canada's new marijuana legalization framework is excluding the small producers with established know-how.

The prime minister told a crowd of supporters that Richard T. Lee served Burnaby, B.C., for 16 years as a provincial legislator and continues to work hard every day to put the best face forward for the city.

One Snowmobiler Has Been Killed In Avalanche In Eastern British Columbia

North District RCMP Cpl. Madonna Saunderson confirms the victim died Saturday when a slide came down on a group of snowmobilers south of Valemount in the Blue River area.

One Snowmobiler Has Been Killed In Avalanche In Eastern British Columbia

Another blast of winter weather is headed for B.C.'s South Coast, where the weekend's snowfall has already triggered dozens of school closures across the region