Darpan News Desk Darpan, 18 May, 2014
Narendra Modi, set to become the next prime minister, will have to move quickly on India's huge expectations with the world watching, a leading Canadian daily said.
"With the world watching and India's huge expectations weighing heavy on him and his government, (prime minister-elect Narendra) Modi will have to move quickly," stated an article in the Globe and Mail after the Indian general election results were declared.
"India's economic growth has slowed dramatically in recent years as policy making at the central government level seized up. Business people, foreign investors and the poor Indian masses who voted his government into power will be expecting real changes after years of economic growth that have left hundreds of millions mired in poverty," it stated.
The fact is, as the Canadian daily reports in a full page article Saturday, that the "sheer scale of Narendra Modi's victory... reflects deep resentment of the long ruling Indian National Congress party, and puts him under pressure to take swift action to break the central government's policy analysis, implement economic reforms and stimulate investment in India's crumbling and inadequate infrastructure."

The paper lays emphasis, as others have equally done, on Modi's "most decisive electoral victory for the country has seen in three decades" and this kind of majority will allow Modi "to rejuvenate India's sputtering".
Toronto Star columnist Haroon Siddiqui, an Indian-Canadian hailing from Hyderabad, wrote: "Never in history has there been an election as mammoth and awe-inspiring as this -- an electorate of 815 million exercising its franchise over five peaceful weeks at 930,000 polling stations, supervised by 8 million officials... On Friday, 1.8 million counting machines got the job done in a few hours -- no hanging chads, no arguments."
"The Modi campaign was flush with money, of a magnitude never seen before -- an estimated $5 billion, second only to Barack Obama's $7 billion binge in 2012," the article stated.
"The BJP was not the only party offering cash for votes, and freebies -- toasters, cellphone, TVs - in every riding," Siddiqui asserts. 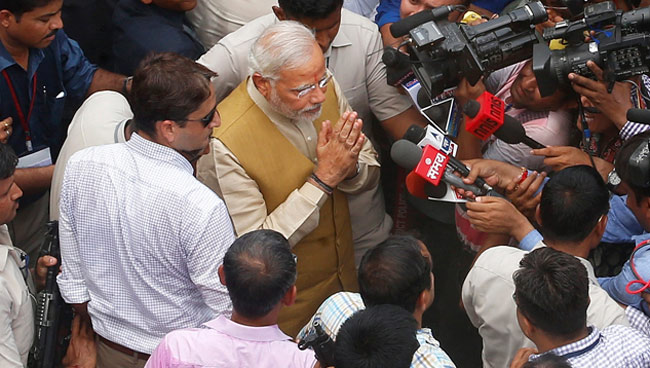 "The Modi campaign copied Obama in making full use of social media. It dominated Twitter, with 11.1 million tweets out of 56 million between Jan 1 and May 12, the last day of voting."
According to Siddiqui, "Four distinct groups coalesced around Modi -- his Hindu base, corporate India..., the middle class fed up with corruption and dysfunction; and the young who feel India has been squandering its chance, not creating enough jobs."
There is a travel ban on Modi that was imposed by the US and several European countries, following the Gujarat riots in 2002.
"As for that American, Canadian and European travel ban on Modi, it'll disappear in a flash. How do you refuse to deal with the elected leader of the world's largest democracy, with a sixth of the world's population, and the 10th largest economy in the world?," it stated.

"That's why Canada, the US, Britain and others have been cosying up to him for months. The Stephen Harper government, in fact, has been one of the sponsors of Modi's biennial trade show for business bigwigs, called Vibrant Gujarat. Last year, Canada was 'a partner country'..."
Prev Next

TORONTO — Four people have been arrested in a shooting in northwest Toronto that sent five people to hospital, one with life-threatening injuries, police said Thursday.

Congratulating India's prime minister-elect over his victory, Canadian Prime Minister Stephen Harper says he is looking forward "to working with Mr. Modi and the new government of India to further strengthen our social and economic partnership to the benefit of our citizens."

An RCMP report has put forth a shocking disproportionate number of female aboriginals being victims of violent deaths as compared to non-natives. The report also mentions that police have solved cases involving both groups at almost a similar rate.

Federal Employment minister Jason Kenney will be brining in at least two new rules pertaining to businesses that want to hire temporary foreign workers, according to a CBC report.

The mother of two Alberta sisters who abducted them is in custody and the girls are now safe.