Darpan News Desk The Canadian Press, 04 Dec, 2018
OTTAWA — The RCMP should have alerted Justin Trudeau's protective detail that Jaspal Atwal — a man with a serious criminal record and a history of violence — might turn up during the prime minister's February trip to India, says a review of the turbulent visit.
The newly released report from the national-security committee of parliamentarians says the RCMP "recognizes that it erred" in not passing along the information about Atwal, who had been convicted of attempted murder years earlier.
The heavily censored report, tabled Monday in Parliament, says government agencies do not have a comprehensive system for vetting guest lists for foreign events involving the prime minister and have not conducted a "lessons learned" exercise to determine what they could do better.
Trudeau was embarrassed during the overseas trip when it was revealed that Atwal, a B.C. Sikh convicted of trying to assassinate an Indian minister in 1986, had been invited to two events with the prime minister. 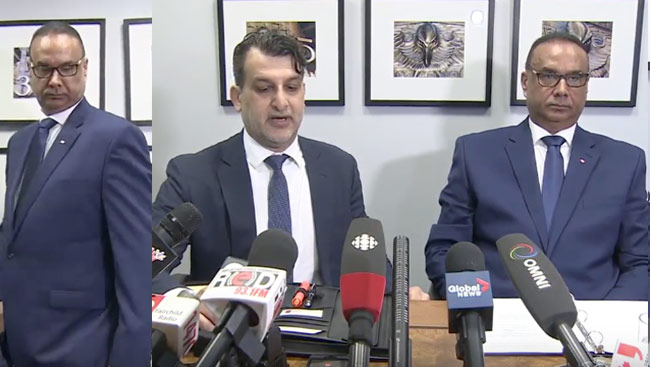 Atwal was also charged, but not convicted, in connection with a 1985 attack on Ujjal Dosanjh, a staunch opponent of the Sikh separatist movement, who later became B.C. premier and then a federal Liberal cabinet minister.
Atwal was photographed with Trudeau's wife and at least one cabinet minister during a Feb. 20 event in Mumbai, and an invitation to a second event, in New Delhi, was rescinded after the news broke.
The committee report says the Mounties had information on Feb. 13 about Atwal's possible presence in India during Trudeau's visit.
READ THE FULL REPORT HERE:
"That information caused RCMP personnel to search criminal databases, revealing information that should have triggered the notification of the Prime Minister's Protective Detail and the briefing of senior officials: neither the Protective Detail nor officials were notified," the report says.
During closed-door testimony, the RCMP acknowledged that mistake and a failure to follow up on direction to determine Atwal's whereabouts, the report says.
It says a senior officer asked a special national-security unit in British Columbia to determine whether Atwal was in Canada, through a voicemail to an officer who was on leave.
Several days later, in an exchange whose details are redacted for security reasons, the same unit received some sort of information on Atwal, but because it was the end of a shift, the team "decided that it would wait until the next day to validate the information."

Still, the RCMP told the committee that Atwal was not considered a physical threat to the prime minister, and that the protective detail would not have changed its security stance even if it had known of his presence at the Mumbai event.
The committee report says this assertion "was questionable, at best," adding the conclusion of security and intelligence officials that Atwal posed no danger "was based on a narrow interpretation of risk."
The report singles out a Feb. 12 RCMP assessment that the prime minister and his family might be perceived as attractive targets for terrorists during the visit.
Trudeau's national-security adviser, Daniel Jean, suggested during a background briefing for media in February — after Atwal's presence had raised questions — that factions in the Indian government had sabotaged Trudeau's trip.
Jean advanced the theory that rogue elements in the Indian government arranged for Atwal’s presence in a bid to prevent Prime Minister Narendra Modi from becoming too cosy with Canada's government, one they believe is sympathetic to extremist Sikh separatists.

The committee report says some of the issues raised by Atwal's presence in India would have been more properly addressed by the Prime Minister's Office, including failures to screen invitees to Trudeau's events.
The members recommend reviewing the role of the national-security adviser to provide clarity in the area of countering threats to Canadian security.
The Liberal government passed legislation last year to create the new committee as a forum where politicians with the highest level of security clearance can hear secret testimony.
The committee, which includes members of the House of Commons and the Senate, announced in April that it would study questions about the trip, including allegations concerning risks to the prime minister's security, foreign interference in Canadian politics and inappropriate use of intelligence.

OTTAWA — Conservative Leader Andrew Scheer is promising more money for police to combat gun and gang violence and says he will audit Canadian jail programs to make sure inmates are ready to rejoin society when their sentences are up.

Canada will contribute $50 million to a global charity for children's education, Prime Minister Justin Trudeau tweeted to comedian Trevor Noah, a pledge that quickly drew criticism both for its content and its form.

Liberal MP Raj Grewal says he has repaid his sizable gambling debts and is now reconsidering his hasty decision to quit politics.

The inquest heard Lemaitre released inaccurate information about the case of Robert Dziekanski that his superiors wouldn't let him correct.

VANCOUVER — Two employees of the fire department in Vernon, B.C., are battling to keep their jobs after a videotape showed them having sexual relations in the interim fire chief's office.