British Columbia's oldest residents will be able to pre-register for COVID-19 vaccinations starting in March after the most vulnerable groups have been immunized under a provincial plan announced today.

Watch live as we announce the next steps to protect people with our COVID-19 vaccine rollout plan.https://t.co/xvUuaroNHA

People who register for the age-based plan will get a reminder to book appointments when eligible, but provincial health officer Dr. Bonnie Henry says timelines for vaccination will depend on available doses.

Residents in long-term care homes and health-care workers who look after them are among those who are currently being vaccinated, followed in February by more residents of Indigenous communities as well as those who are over the age of 80.

Those aged 75 to 79 will be vaccinated starting in April as part of the pre-registration strategy that will also include people with underlying health conditions before those in younger age groups are immunized.

Everyone who is vaccinated will get a record of their immunization and a reminder of their second dose by text, email or phone call.

The aim is to administer vaccines to 4.3 million eligible residents by September using larger facilities including school gyms, arenas and mobile clinics, as well as home visits for those who are unable to attend a clinic. 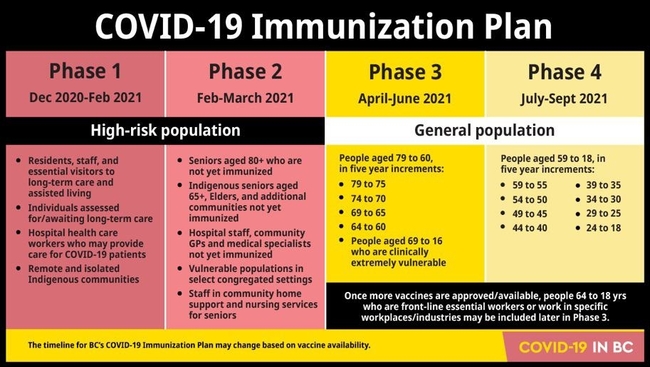 At every step, it is focused on protecting those who are most vulnerable to severe illness. Phase 1 (current phase)

September Immunization for clinically extremely vulnerable individuals British Columbians aged 69 to 16 with the following conditions will be eligible for earlier immunization in Phase 3, as they are deemed clinically extremely vulnerable: * solid organ transplant recipients * people with specific cancers: * people with cancer who are undergoing active chemotherapy * people with lung cancer who are undergoing radical radiotherapy * people with cancers of the blood or bone marrow such as leukemia, lymphoma or myeloma who are at any stage of treatment * people having immunotherapy or other continuing antibody treatments for cancer * people having other targeted cancer treatments that can affect the immune system, such as protein kinase inhibitors or PARP (Poly (ADP-ribose) polymerase) inhibitors * people who have had bone marrow or stem-cell transplants in the last six months or who are still taking immunosuppression drugs * people with severe respiratory conditions, including all cystic fibrosis, severe asthma and severe chronic obstructive pulmonary disease * people with rare diseases that significantly increase the risk of infections (such as severe combined immunodeficiency, homozygous sickle cell disease) * people on immunosuppression therapies enough to significantly increase risk of infection (biologic modifiers, high-dose steroids, AZT, cyclophosphamide) * people who had a splenectomy (spleen removed) * adults with very significant developmental disabilities that increase risk (details to come) * adults on dialysis or with chronic kidney disease (Stage 5) * women who are pregnant with significant heart disease, congenital or acquired * significant neuromuscular conditions requiring respiratory support

The study involved more than 1,300 moderately ill patients admitted to hospital, including some at UHN.

Trudeau said he spoke with the Queen by telephone Friday to let her know that Chief Justice Richard Wagner is stepping in until Trudeau names a new governor general.

The Protecting Canada Project is airing its first 30-second ad, in English and French, on television and online.

The latest numbers on COVID-19 in BC

The latest numbers on COVID-19 in BC

But on Thursday Fortin had to deliver bad news on vaccine deliveries to Canada for the third time in less than a week.