Darpan News Desk IANS, 12 Sep, 2018
Pakistan's jailed former prime minister Nawaz Sharif, his daughter Maryam and son-in-law Captain (retd) Muhammad Safdar will be granted parole to attend the funeral of Mr Sharif's wife Begum Kulsoom, a media report said today.
The three will be granted parole from the time of Kulsoom Sharif's funeral prayers till her burial, Geo TV reported, citing Interior Ministry sources.
Nawaz Sharif, Maryam and Muhammad Safdar are currently serving jail terms in Adiala Jail in Rawalpindi after being convicted by an accountability court in a corruption case in July.
A request is necessary for parole to be granted, the sources added.
Kulsoom Sharif, the wife of Nawaz Sharif, died today in London after a long battle with cancer. She was 68.
According to sources, the Sharif family has decided to bring back Begum Kulsoom's body to Pakistan, it said.
"She will be laid to rest in Pakistan," the family confirmed. 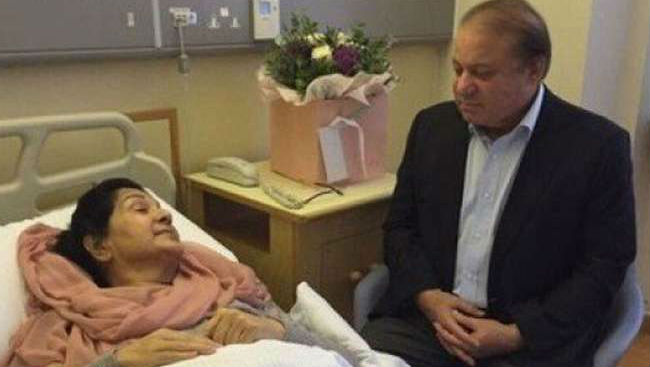 Pakistan Prime Minister Imran Khan has condoled her death and said all facilities will be provided to her family as per law.
The Pakistan prime minister has directed the Pakistan High Commission in London to assist in provision of all necessary facilities to the family of the deceased, said an official statement.
Prev Next

Begum Kulsoom Nawaz, wife of deposed and now jailed Pakistan Prime Minister Nawaz Sharif, passed away in a hospital in London on Tuesday after months of battle with cancer, the family said.

The US National Cancer Institute has give the "Outstanding Investigator Award" to Professor Arul Chinnaiyan, from the University of Michigan, and $6.5 million in funding over seven years, to identify cancer biomarkers to improve diagnosis and develop new targeted therapies.

An Indian man has been charged with stabbing to death his roommate for talking loudly on the phone.

"Nandakumar Rajalakshmi is the winner of this year's Young Scholar Award for her outstanding research work in detecting life-threatening symptoms using smartphones," the Society said in an e-mail to IANS.

Anshdeep stumbled upon a block when he was told he would have to change his looks. But he moved the court against the riders and the decision came out in his favour.

According to police, the four accused took the transgender to a deserted place near a cab station in Sahiwal district, around 250 kms from Lahore, on Thursday and set him on fire after he resisted their attempt to sexually assault him.