Trump Tweets Image Of His Head On Rocky Balboa's Shirtless Body US President Donald Trump has photoshopped the image of his face, superimposing it on top of the body of the fictional Rocky Balboa from the Hollywood movie directed by and starring Sylvester Stallone.

Trump had tweeted the doctored image on Wednesday.

While the image has no caption, it came on the 34th anniversary of "Rocky IV," which ESPN noted in a tweet shortly before Trump sent out the image, reports variety.com.

The Rocky-inspired tweet was released while the US Commander-in-Chief was reportedly playing golf.

Twitterti, naturally, had a field day.

Comedian Josh Comers tweeted: "Sorry, but Rocky beat the Russian," alluding to the allegations of collusion between Trump's presidential campaign and the Russian government. 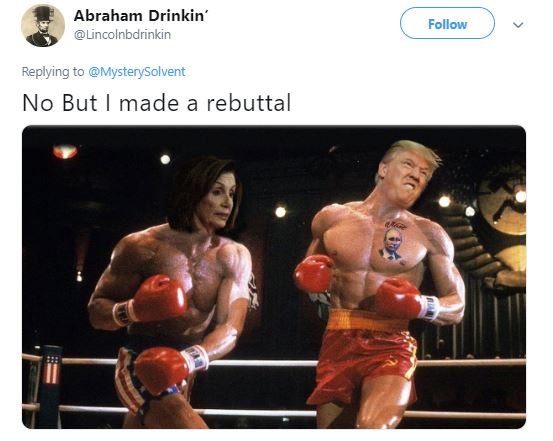 Author and pundit Molly Jong-Fast wrote: "I do not think this is an accurate portrayal," and Media Matters for America editor-at-large Parker Molloy mocked Trump's tweet by transforming the image into a clip of the President licking his lips in satisfaction.

Is it just me or did this Trump Rocky photo make anyone else throw up in their mouth a little?

Tha is narcissistic, delusional & horrifying. What is wrong with you?

Wakefit.co has announced an internship programme called the 'Wakefit Sleep Internship', where selected candidates are required to sleep nine hours every night for 100 days.

In a video posted by the Pakistan Cricket Board (PCB), Shan narrated how they met the cab driver and how he ended up offering dinner to him.

An Italian lawmaker brought some romance to his parliamentary intervention on Thursday by proposing to his girlfriend who was watching proceedings from a gallery reserved for guests.

Indian Groom AKAASH YADAV Skydives Into His Baraat For His Wedding With GAGANPREET KAUR In Mexico. WATCH VIRAL VIDEO

Indian-origin residents of the United States, Akaash Yadav and Gaganpreet Kaur, recently got married in Mexico but their wedding was no ordinary affair.

Indian Groom AKAASH YADAV Skydives Into His Baraat For His Wedding With GAGANPREET KAUR In Mexico. WATCH VIRAL VIDEO

Here are some really interesting gifting ideas to make the joyful period even more exciting and meaningful.