A Facebook Event In Delhi Is Asking Us To Celebrate Diwali By Shouting 'Thain Thain'. Not A Joke

Remember the UP cops who yelled out 'thain thain' when their pistols got jammed while chasing a goon?

#WATCH: Police personnel shouts 'thain thain' to scare criminals during an encounter in Sambhal after his revolver got jammed. ASP says, 'words like 'maaro & ghero' are said to create mental pressure on criminals. Cartridges being stuck in revolver is a technical fault'. (12.10) pic.twitter.com/NKyEnPZukh

Around 5,000 people have indicated they’re interested in turning up at Central Park in Delhi’s Rajiv Chowk on November 4 just to shout ‘thain, thain’. This is how they plan to celebrate an ‘eco-friendly’ Diwali.

“I never anticipated such a response within just 20 hours of creating the event,” said Satyam Aggarwal, the event’s organiser. Aggarwal, founder of Delhi-based travel agency The Wander Bottle, who created the event on the organisation’s Facebook page.

The event is inspired by an Uttar Pradesh policeman who was recently caught on camera mimicking a gun after his colleague’s gun jammed. The video sparked multiple memes, but the police official was likely to receive a certificate of bravery. 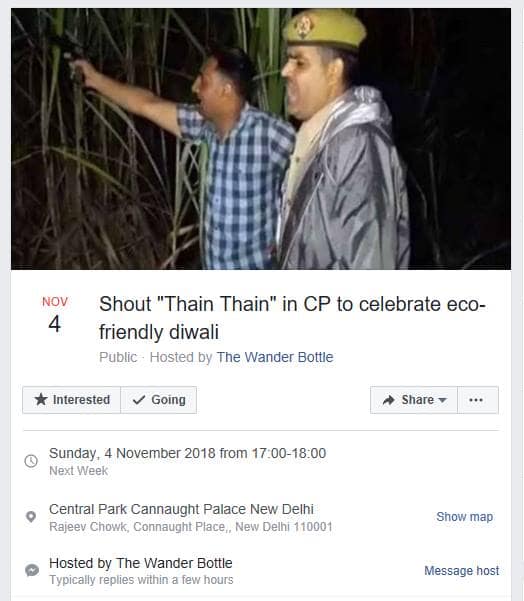 The 24-year-old entrepreneur created the event on October 22, and at least 1000 people have said they will be attending the event. Aggarwal doesn’t believe the Supreme Court’s restrictions on fireworks will be very effective in reducing air pollution.

“I think the two-hour rule will not be effective as there is no system to stop those who will definitely be burning crackers throughout the night,” he said.

Aggarwal, who says he has organised such events in the past, acknowledges his event might not have been as successful without a link to the viral video of the policeman.

“The youth always connects with memes and trends, and to target the masses, we used the ‘thain, thain’ meme to reach as many people as possible,” Aggarwal said. He is hoping to do more than just encourage environmentally-friendly ways of celebrating Diwali.

“Every year we try to celebrate Diwali with the underprivileged so that they don’t feel left out during the festive season. This year also, we are urging people who are coming to the event to bring something for the underprivileged,” Aggarwal said.

Aggarwal has listed an account to which people can make donations, and is hopeful an NGO will collaborate for the event. He said they managed to raise Rs 10,000 last Diwali.

Shout outs, where people gather in large groups to shout slogans linked to things that went viral on the internet, are common now. Aggarwal’s event isn’t even unique. There are events across Indian cities inviting people to do the same, his just received the most responses. 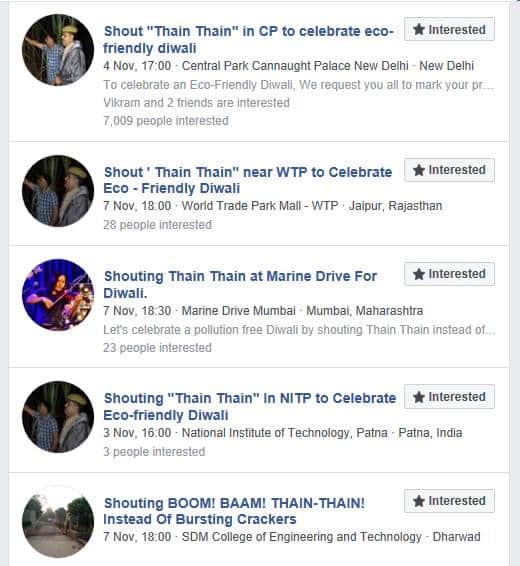 The 'Most Fertile' Woman - This 40-Year-Old From Uganda Has 44 Children!

Mariam Nabatanzi, a 40-year-old woman from Uganda's Mukono District has been dubbed the African country's most fertile woman after it was reported that she has given birth to 44 children.

The 'Most Fertile' Woman - This 40-Year-Old From Uganda Has 44 Children!

Mike Roman, a teacher from New Jersey, recently got his five minutes in the internet spotlight after coming on a podcast to discuss his unusual eating habits. The 41-year-old claims to have eaten pizza at least once a day for the last 37 years.

A Peruvian man recently divorced his wife after discovering her infidelity while looking around on Google Street View.

The chairman of a private space contractor in Chengdu, China, recently revealed plans to launch an "artificial moon" satellite up to eight times as bright as the real moon and capable of replacing traditional streetlights.

Being surrounded by books is a matter of routine for civil services aspirants, but for Sreenath K, a coolie who cleared the written test of the Kerala Public Service Commission (KPSC), the preparation is just about his phone and earphones as he goes about his job.