Ratan Tata Gets Called Chhotu On Instagram. His Million-dollar Reply Wins Internet Over

Tata Sons Chairman Emeritus Ratan Tata has defended a woman on Instagram after she got criticised for calling him 'Chhotu'.

Tata on Tuesday shared a post on Instagram after he reached 1 million followers on the social media platform. 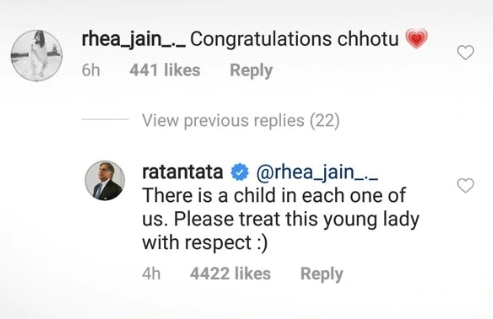 Commenting on the post, a woman wrote, "Congratulations Chhotu" to which users responded in a critical fashion calling it "disrespectful" and "shameful".

Coming out in her defence, Tata wrote: "There is a child in each one of us. Please treat this young lady with respect".

I’ve just seen that the number of people on this page has reached a milestone. This wonderful online family is not what I expected when I joined Instagram and I have you to thank for it. I do believe that the quality of connections you make in this age of the internet is far greater than any number. Being a part of your community and learning from you is truly exciting and makes me very happy and I hope our journey together continues.

Ratan Tata joined Instagram last year in October. In the short span of time, he has mastered the social media game. He recently broke the internet after he shared a picture of himself from his young days.

I was going to post this yesterday, but I was then told about “throwbacks” and how they occur on Thursdays. So here is a throwback from my days in LA, not long before I happily returned to India. #throwbackthursday

The 51-year-old bureaucrat-turned-politician almost replicated the AAP’s fairy-tale victory of 2015 by riding on his government’s development agenda, and in the process emerged as a key leader in the national political landscape.

A total of 44,951 pilgrims travelled from November 9, 2019 to January 31, 2020 via Kartarpur corridor to pay obeisance at Sri Kartarpur Sahib, central government said in a written reply to a question.

Wishes Pour In As Kejriwal Heads For Hat-Trick

With Arvind Kejriwal looking all set for a third term as Delhi Chief Minister, congratulatory wishes are pouring in from leaders cutting across party lines.

Wishes Pour In As Kejriwal Heads For Hat-Trick

DSP Harkrishan Singh said the crime took place on Sunday night at Butala village in Baba Bakala when Sukhmanpreet Singh returned home from a marriage function and was opening the main door of his house.

The case of the death of a four-month-old infant in Delhi's Shaheen Bagh has been termed as a violation of the "Right to Life" under the Constitution by twelve-year-old Zen Gunratan Sadavarte, who was recently awarded the National Bravery Award by President Ram Nath Kovind.

Will Be Happy When Convicts Are Hanged, Nirbhaya's Mother

Nirbhaya's mother on Wednesday welcomed the verdict of the Delhi High Court which gave the rapists a week's time to exercise their legal remedies and hoped that a final death warrant is issued against them soon.

Will Be Happy When Convicts Are Hanged, Nirbhaya's Mother