In the wake of the brutal rape and murder of a veterinary doctor that has shaken the nation, Shravan has posted a series of comments that can be described as nothing but crude and insensitive.

According to the filmmaker, "women should carry condoms and cooperate in rape".

Sharvan's comments comes days after a 27-year-old veterinary doctor was gangraped and burnt to death allegedly by two truck drivers and two cleaners near a toll plaza at Shamshabad on the outskirts of Hyderabad last week. Cyberabad police on Friday night announced the arrest of the four accused, who allegedly trapped the victim by deflating a tyre of her scooty parked near the toll plaza. 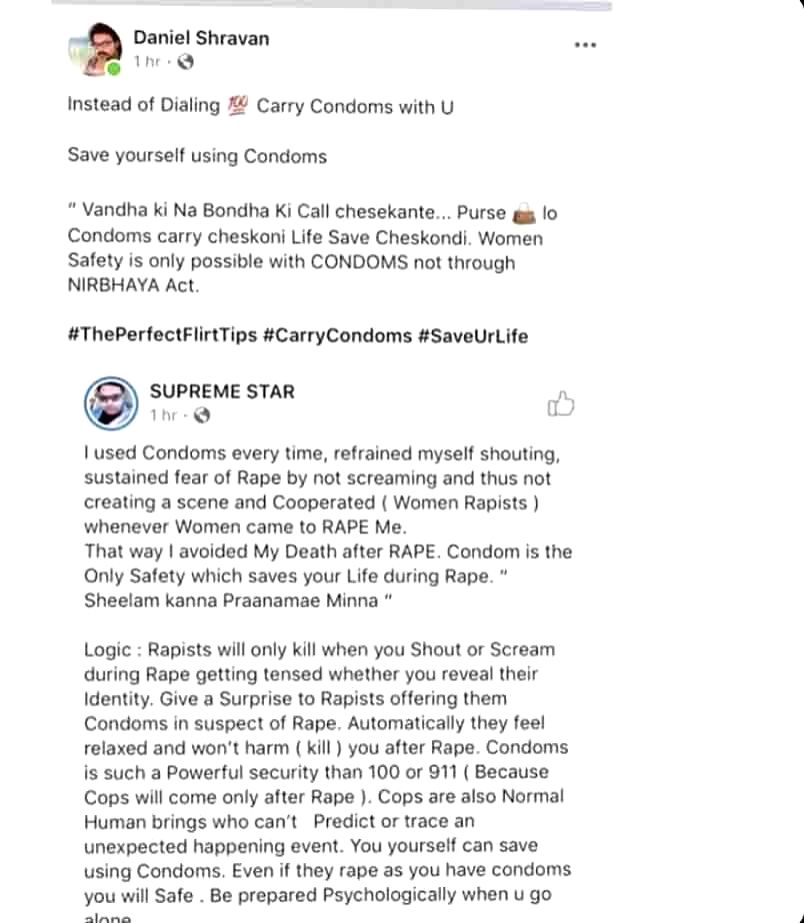 According to OpIndia, Shravan took to Facebook to suggest that women should carry condoms and save themselves from getting murdered, instead of calling up the police. He also mentioned that women should cooperate with rapists in the act and offer the rapist a condom so that they don't get killed.

In a now deleted post, he wrote: "Murder is a sin and a crime. Rape is a corrective punishment. No justice is going to happen with Nirbhaya Act or Priyanka Act. The agenda of rape is fulfilling the sexual needs of rapists based on that time or mood."

He added that rape should be rationalised and "rapes without violence" should be legalised as that's the only way to control rape victims getting murdered.

He also wrote: "Instead of dialling 100 carry condoms with U... Women safety is only possible through condoms not through Nirbhaya Act.

Even though he deleted his post, singer Chinmayi Sripaada shared the screenshots of his note on her Twitter page and slammed Shravan.

She wrote: "Ideas going around. Some of this content is in Telugu. Basically the ideas these men have given is - cooperate and offer condoms to prevent murder after rape, women's organizations are the reason for rape. Rape is not heinous, murder is."

She added: "Also - He would advice the same to his own family. Content in Telugu. 'Sick if these women's drama. Will they rape if they accept our proposal?' Poiny is if women say no to deviants like him, rape is the only option for 'Adamant bitches'." 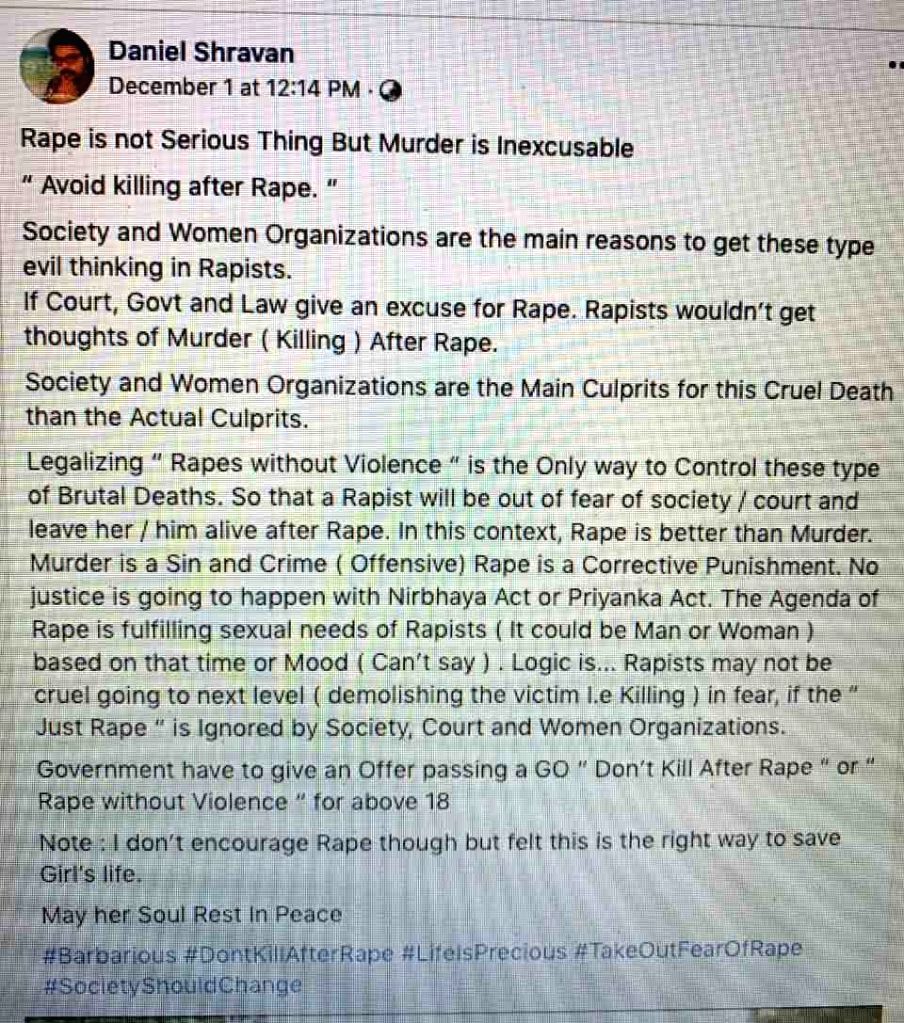 Actress Kubbra Sait reacted: "Whoever this Daniel Shravan is: needs medical help, maybe some heavy duty whacks up his butt, will help him clear his constipated mind. Infuriating little prick."

Social media users took to Twitter to slam Shravan and his comments.

Another said: "Just when you thought it can't get worse for women. #Danielshravan."

"Now the whole world know how he was born.... your mother is a really cooperative woman," a user commented.

A netizan said: "What the hell does 'rape without violence' mean? You are asking women to co-operate with rapists? Carry and provide condoms? So that every man can have a go at any woman, any time, anywhere he pleases? And walk away feeling proud he didn't kill them?"

Reports are doing the rounds about absconding godman Swami Nithyananda's legal team is hard at work on the draft of a petition to the UN seeking recognition for his "sovereign nation of Kailaasa".

On Masoodi's query on Farooq Abdullah's house arrest, Singh said: "This is not even house arrest. I would rather say Amit Shah is one of those kind-hearted Home Ministers who has put those people under house arrest in their own houses."

Internet In J&K To Be Restored Soon

After four months, the authorities on Wednesday decided to restore internet facility on the fixed landline connections in Kashmir, top sources told IANS.

Internet In J&K To Be Restored Soon

Saying the Sikh community was pained and anguished, the Akali Dal on Tuesday described as "very unfortunate" the statement of Union Home Minister Amit Shah on not commuting the death sentence of Babbar Khalsa terrorist Balwant Singh Rajoana for the assassination of former Punjab Chief Minister Beant Singh.

The state-wide facility will be available on DIAL 100, 112 and 181 through which a woman caller will be immediately connected to the Police Control Room (PCR), it said.