The 2015 election is filled with as much uncertainty as what the country’s 42nd cast of Parliamentarians will face in the months ensuing.

Prime Minister Stephen Harper ushered in the longest election campaign of the country’s modern history when he dropped the writ on August 2, 78 days prior to the election.

The political landscape is shifting, structurally, with the addition of 30 seats in the House of Commons, the inclusion of two party leaders on their first federal campaign trails, and an exodus of politicians all interposed on brooding issues surrounding a receding economy, challenged environment, and national and foreign policy initiatives at diametric odds with Canadian civil liberties.

The 2015 federal general election is filled with as much uncertainty as what the country’s 42nd cast of Parliamentarians will face in the months ensuing.

Democratic Reform Minister Tim Uppal presented a report that showed, to support the work of the new Members of Parliament (MPs), it will cost $19.3 million plus an additional $15.2 million just to hold the actual elections on October 19, when polls open for voting.

Under the Fair Representation Act, Ontario will receive 15 new seats, Alberta and British Columbia, six each, and Quebec, three. The changes will be so substantial that nearly every district in Canada will be altered or affected in some way, whether minute or large. Only a few dozen of the original 308 ridings will be untouched, two of which sit in B.C.’s northern parts.

Richard Johnston, Canada research chair in public opinion, elections and representation, said, “If you transpose the 2011 vote to the 2015 boundaries, a large expansion of the Conservative majority can be identified.” In the NDP-held Burnaby-Douglas riding, for instance, a large piece of the Conservative voting base situated in North Vancouver will bleed into this riding, making it more competitive. Though, Johnston also indicated that the vote is up for grabs in the ridings created in Metro Vancouver and the Greater Toronto Area.

The Harper Conservatives have formed government since 2006, which includes two minorities and the most recent majority where they won 166 seats in the House. That number has since reduced to 159.

The upcoming election will see an exodus of Conservative incumbents, just over 30, who will not be seeking re-election in this election. Peter MacKay - who held nearly a handful of high profile portfolios in national defence and foreign affairs prior to his current position in justice. As well, the sudden resignation of John Baird, which prompted a carousel of ministers in prime cabinet positions.

Appointments are Harper’s way of signalling approval; a grant of upward mobility is the Prime Minister’s tactic that keeps members in line. But this partisanship came to bite the Conservatives when the Senate spending scandal emerged and which now sits in court with Mike Duffy - a Conservative Senator and Harper appointee - having to defend against allegations of fraud and breach of trust. And Duffy wasn’t the only Canadian senator wrapped up in legal battles, which have since prompted myriad discussions by politicians and party leaders regarding Senate reform.

But, as UBC’s Johnston states, “In the case of the government, it’s all out there, it’s all happened already.” This is the advantage and baggage the Conservatives have as government.

Harper’s Conservatives are also a fundraising machine, something which may have played into Harper’s reasoning to drop the writ as early as he did. As Johnston stated, the Conservatives are simply more efficient at raising money. “They have raised about twice as much as other parties.”

The Conservatives propose to protect the tax-free savings account, extend a permanent home renovation tax credit as well as a tax-free RRSP withdrawal limits of up to $35,000 for first-time home buyers.

Safety and security is another pillar in the Conservative agenda, historically, and in 2015, it is no different, especially following the incidents that claimed the lives of Corporal Nathan Cirillo and Warrant Officer Patrice Vincent in October 2014. The Tories have proposed protections against terrorism, part and parcel of this is the banning of travel to known terrorist zones. But nothing strikes as far-reaching as Bill C-51.

The bill passed with Liberal support in May of this year. In broad terms, the legislation provides police with powers labelled as preventative arrest, increases in investigative reach, and scope of the Canadian Security Intelligence Service and the criminalization of the promotion of terrorism.

While critics have raised issues over the lack of oversight in lieu of such expansive powers granted to federal agencies, the Conservatives remain steadfast that the legislation that exists in C-51 is necessary to protect the public against terrorist actions.
However, whether tax breaks, credits and policies on public safety and security are enough to maintain the blue tide of support as realized in 2011 remains to be seen. 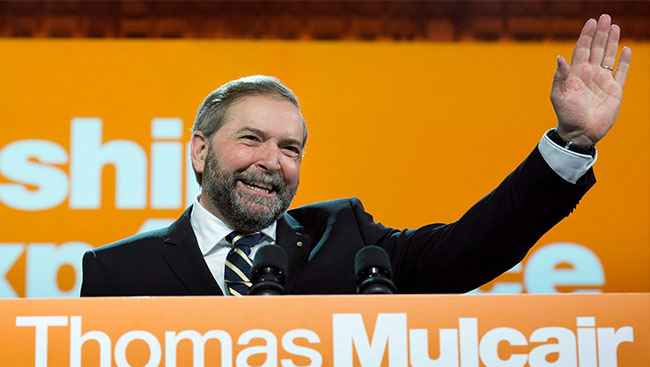 The fiery Tom Mulcair demonstrated in Question Period and other calculated moments that he was up to the task of leading the Official Opposition, playing foil to Harper’s Conservative machine. Mulcair’s opposition has challenged the Conservative regime on the economy, the government’s jobs record and position on anti-terrorism policy, all the while extending a NDP-centric platform that contains conventional investment strategy and left-leaning initiatives.

In the Maclean’s debate, in early August, Mulcair pointed to Canada’s declining employment figures and drew attention to the country’s shrinking economy, citing the five months prior as evidence of a receding economy. It left the Prime Minister with no option but to agree where he had previously eschewed the term.

The NDP have hinged their political cart to the middle class - as the other parties have as well - and job creation. The current caucus of 95 - a number that sat at 103 following 2011’s election - sees investment in infrastructure and breaks for small and medium-sized corporation as the way to push the country’s economy forward.

The NDP are also leaning heavily on family and have extended an initiative to create a million $15.00-a-day child care spaces, along with a $15 minimum wage in sectors under federal regulation. Seniors are addressed via a proposed reduction of the qualifying year for Old Age Security.

But the widest dichotomy between the Conservatives and the NDP is their opposing stances on the government’s anti-terrorism bill, C-51. Mulcair has vowed to repeal the legislation if he was to take up the office of the Prime Minister.

Not your daddy’s Grits

Trudeau was elected Liberal Party leader in April 2013. After the party was decimated in the 2011 federal election where they saw their base shrink to 34 seats (currently 36 in caucus), the Grits were prepared to make any changes necessary to recoup popular opinion - Trudeau was the most visible path.

The party’s campaign slogan, ‘It’s time for Real Change’, defines the Liberal Party election platform as one centred on reshaping the country. Trudeau entered early in the campaign trail that he could not rule out a budget deficit if his Liberal regime was to assume power. This he blames on Conservative bookkeeping. Though the policies proposed by the Grits may also be contributory as there are widespread initiatives covering the economy, environment and government that require millions, if not billions, of dollars to put in place.

Economically, the Liberals vow to offer a tax break to the middle class - of course vying for this so-important, and loosely-defined, political base - by shaving the bracket by seven percent and dropping the taxable percentage to 20.5 percent from 22. Another initiative, the Canada Child Benefit, pledges to send families a tax-free monthly amount up to $533, per child, depending on the child’s age and family’s income.

The Liberals also pledge to invest in clean technology and vow action on climate change, to protect our freshwater and oceans. Further to the party’s idea on open and fair government is the repeal of the Conservative’s Citizen Voting Act and improved access to online government services. In addition, the Liberals wish to save home mail delivery and propose to bridge the relationship with First Nations and the United States.

Moreover, there is mention of changing the Senate - not abolishment - by creating “a new, non-partisan, merit-based, broad and diverse process to advise the Prime Minister on Senate appointments.”

In 2014, the Liberal leader had removed all Senate members with the party’s affiliation following the burst of scandals that erupted in the Red Chamber from inappropriate claims on expenses by particular Senators. The maneuver was historic and an attempt at transforming the partisan makeup of the body without having to go through any constitutional debate as abolishment would necessitate.

The Liberals are clearly on a path to redemption clinging to as many perceived popular policy initiatives in an attempt to reclaim its lost support. But whether Trudeau can shed the shadow of inexperience cast on him is difficult to pinpoint as is how much it could play out in the voting public’s mind at the polls next month.

Change in the air

This election may be one of the most challenging to predict in recent history. With 30 new ridings necessitating the redefining of boundaries in the vast majority of the over 300 ridings nationwide, there’s much and more to debate.

Add to the mix an election with two leaders who are novice federal campaigners, a slumping economy, and a party which has been in power for nearly the past decade, and the whiffs of change feel as if they’re mingling in the air.

The question remains whether the Conservatives can hold (or even expand) their base, the New Democrats can become a governing party for the first time in federal history or the Grits can find a resurgence under Trudeau’s guidance and far-reaching policy initiatives. Also to keep an eye on will be whether May’s Greens or the Bloc Quebecois under Gilles Duceppe (once again) can improve on their fringe status in the House with one and four seats respectively.

Whom does the general population want?

Darpan conducted a poll asking its readers who they think will win the elections and be the next Prime Minister of Canada. The results were surprising. About 41 per cent of the participants believe that Liberal Leader Justin Trudeau will win the 42nd Canadian Federal Elections. Prime Minister Stephen Harper from the Conservative party received 32 percent of the votes, whereas NDP’s Tom Mulcair received 23 percent. Green party’s Elizabeth May received the lowest votes – just 5 percent.

Stephen Harper and Tom Mulcair both blasted Justin Trudeau for announcing a day earlier he would scrap the multibillion-dollar purchase of F-35 stealth fighters to replace the current aging fleet of CF-18s.

The Liberal leader says he has requested a meeting with Stephen Harper and Tom Mulcair to talk about what can be done to support refugees and help them come to Canada.

Trudeau will begin the day at the Canadian Museum of History in Gatineau, Que., where he is expected to react to gross domestic product data released by Statistics Canada.

At an event held at Grand Taj Banquet Hall in Surrey, Liberal Party of Canada candidates spoke to the media about the plans made by the Liberal Party for the betterment and growth on the city and the country at large.