Whether you’re an avid shopper, foodie, craft beer enthusiast or anywhere in-between, the quirky city with a dozen names has you covered

“Keep Portland Weird.” This odd catchphrase can be seen printed on T-shirts, mugs, and stickers and even painted on the side of a building in the famous Oregonian destination. But it’s certainly not meant to be taken in a negative context, but rather it quite accurately encapsulates the quirkiness of the city that’s got almost as many nicknames as it does bridges. The City of Roses, Bridgetown, Beervana, P-Town, PDX, you get the picture.

Up until my most recent visit, my knowledge of Portland came primarily from friends telling me about their tax-free shopping excursions, and watching the IFC sketch comedy series Portlandia. Although the show’s cast say they exaggerate reality, in just three days I personally experienced what’s often poked fun of on the show: locally-made everything, huge brunch line-ups, and more bird-patterned merchandise than I have ever laid my eyes on. (Fans know what I’m talking about. If you’ve never watched the program, do yourself a favour and queue it up on Netflix).

Before I set off, I turned to Travel Portland, the town’s official destination marketing arm, for some advice on what to do. They are running a campaign until March 31 called “Portland is Happening Now,” enticing residents living in neighbouring cities like Seattle and Vancouver to make the short trip south. Anyone who books a local hotel stay on TravelPortland.com receives an online coupon pack providing discounted or free perks like food at certain eateries, a leather and cloth tote bag from the Portland Garment Factory, and my personal favourite, a ceramic mini-growler (refillable beer container) from Portland Growler Co. Redemption is simple, just download an app called the Chinook Book (chinookbook.net) on your smartphone and follow the instructions. 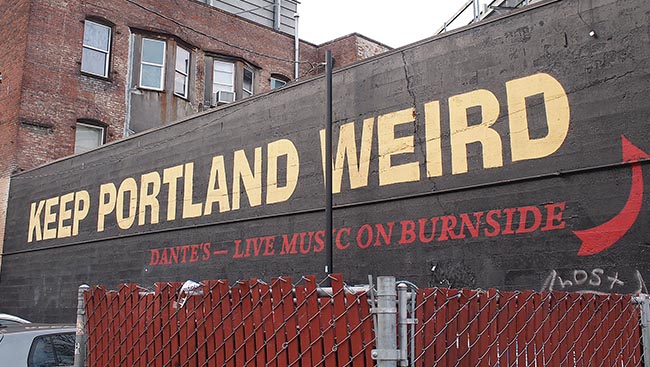 I was offered a stay at one of the participating hotels, the boutique Hotel Monaco (506 Southwest Washington St.) smack dab in the middle of downtown. I didn’t know much about the place going in, but I have quickly bestowed upon it the title of best-hotel-ever. Here’s why:

It’s the first dog-friendly establishment I’ve ever encountered, yet still somehow manages to retain a pleasant, slightly floral scent throughout. The décor of the lobby lounge, which comes with a life-sized set of Jenga and Connect Four, can only be described as funky, and is where a complimentary happy hour featuring local wines and craft beer is served nightly. There’s a well-appointed 24-hour gym and a yoga mat in every closet, important amenities to work off those microbrew pounds. The employees are genuinely friendly and a doorperson is almost always out front to greet guests. The rooms have an avian-theme, highlighted by the bird-patterned wallpaper and duck feet lamps. Oh, and animal print bathrobes.

Although Portland is easily accessible via a car ride from Vancouver, taking approximately five hours, one can also opt to board the Amtrak train (eight hours) or hop on a plane (one hour, plus a $40 taxi ride to the city core). The great thing about staying downtown is that many of the touristy destinations involving, dining, shopping and sightseeing are easy to get to. If you’re on foot like I was, it’s only rarely that you may need to catch a $10 to $15 cab ride to get to an out-of-the-way place. A note to drivers, parking in the city centre can get costly during the day, but metered spots are free nightly after 7 p.m. and on statutory holidays. 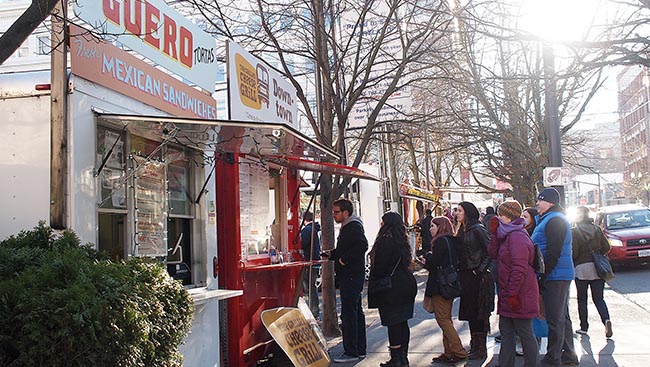 Let’s talk brunch. I asked the front desk girl at Hotel Monaco for a recommendation, and she warned a lengthy wait would accompany almost any spot, stating with a laugh, “Portland people are really patient.” But hey, that’s part of the fun, right? One spot she suggested turned out to be a neighbourhood staple called the Bijou Café (132 Southwest 3rd Ave.) Open for more than 35 years, it’s unassuming on the outside, and bright and contemporary on the inside. Fully supporting the “slow food” movement, using local and sustainable ingredients, there were lots of non-traditional offerings like the Ota Tofu (prepared with parsley and garlic, sautéed in olive oil, for just $8).

For lunch, I recommend eating al fresco. Portland is home to one of the most vibrant food cart scenes anywhere, with over half a thousand portable kitchens set up all over the city. There are a few areas where several carts cluster — a good example is the “pod” on 10th and Alder that takes up square block. In the mood for hot bowl of Pho, I stumbled across Huong’s Vietnamese Food. The #8 I ordered off the board, a simple Regular Beef Soup, was a hearty portion of noodles, thin steak slices and beef balls, all for $6.

Ready to leave the downtown bubble? Make your way over to Southeast Division Street, about a 10-minute drive away. Famous for its restaurant scene, there was a particular standout that’s as much a visual experience as a palatable one. The Bollywood Theatre (3010 Southeast Division St.) doesn’t actually show films, but brings a taste of Mumbai to the Pacific Northwest. It’s full of kitschy Indian memorabilia plastered from floor to ceiling, seating is self-serve, and the authentic-tasting dishes are brought out on metal plates, great for sharing. Be sure to try the Chicken Curry with saffron rice! 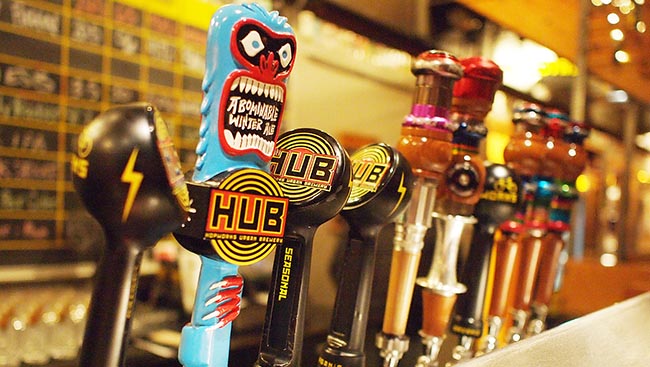 Brew enthusiasts will quickly realize why “Beervana” is another name for Portland. Even dedicating your entire trip to brewery hopping, you would be hard-pressed to hit all of Portland’s 50-something businesses specializing in the frothy drink. Hopworks Urban Brewery, also located in the Southeast, was the first “eco-brewpub” to open up, meaning all 15 beers they regularly carry are organic and made in-house. You might recognize some of their products lining liquor shelves, such as the deliciously hoppy Abominable Winter Ale or the classic Hopworks Organic IPA.

Since you’re eating and drinking local in Portland, might as well shop local too, right? There’s plenty of places to do that, and, as a bonus, there’s no sales tax in the State of Oregon so what you see on the price tag is exactly what you pay. Those looking for a mall-going experience can visit Pioneer Place Mall (340 Southwest Morrison St.), home of the Made in Oregon store. You can find everything in here from Portlandia souvenirs to designer wool blankets made by Portland-based Pendleton Woolen Mills.

After Pioneer, lots more uniquely PDX buying opportunities await you in the surrounding area. There’s a long list of stores you won’t find anywhere else, including Danner (1022 West Burnside St) that sells USA-made boots and apparel; Powell Books, the self-proclaimed largest independent used and new bookstore in the world (1005 West Burnside St.); and Woonwinkel (935 Southwest Washington St.) that is kind of like a smaller and trendier version of IKEA. 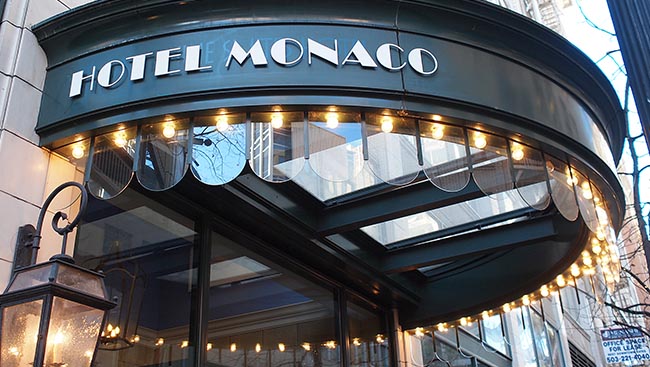 If you’re only able to pick one tourist attraction to go to, make it the Portland Art Museum (PAM). Founded in 1892, it is the seventh oldest museum in all of the United States. Some quick stats: there are over 42,000 objects in the PAM collection; there are 112,000 square-feet of display space; over 23,000 households hold a membership; and the museum receives some 350,000 annual visitors. Until April 5, PAM is hosting the Masterworks | Portland: El Greco exhibit where people can see several of the artist’s pieces like The Holy Family depicting the Virgin Mary.

5 Fun Ideas For a Summer Staycation in Vancouver

If you don’t have travel plans this summer, why not have a “staycation” in Vancouver? Stay-at-home vacations are becoming more and more popular as they offer budget-friendly and stress free alternatives to the conventional jet-setting vacation. Here are five fun ideas for a memorable staycation in Vancouver, proving you don’t have to jet off to have a fabulous time!