The story of how Sunger became such a recognized face for GNBC1 is one that speaks of determination and a dream that begins in childhood.

Born and raised in Victoria, BC, Sonia Sunger is the weekday anchor for Global News BC1, a channel that founded its roots in 2012 but became a reality in March 2013. Sunger has been with this new, unknown project since its inception, working alongside a dedicated crew to bring it from an idea to an accepted and successful program. Besides sharing emotional stories with an audience, she is also an amateur oil painter and possesses a love for both cooking and astronomy.

The story of how Sunger became such a recognized face for GNBC1 is one that speaks of determination and a dream that begins in childhood. The question of how is one that gets thrown around a lot when people learn of Sunger’s career. She says, “The competition is fierce. If you want a career in broadcasting, you need patience and a thick skin. You make your own path and there is no ‘one’ way of doing it, but you have to be your own advocate and try to make opportunities for yourself.”

Although being a self-starter is a trait that’s recommended, Sunger also thinks that you should accept help wherever you can. “Be willing to learn from everyone around you. If you find someone who is willing to give you feedback or is offering constructive criticism, listen to what they’re saying. You will only further yourself by putting their advice into action,” she says before adding, “This includes photographers, editors, and directors.

Everyone.”Journalism was a field of aspiration for Sunger throughout her childhood. From the age of 10, Sunger would plant herself in front of the TV screen after school to watch Oprah. When sharing this story, she couldn’t help but laugh and clarify, “I loved this show and watched it religiously. Whether you are an Oprah fan
or not, there is no denying that the show was completely rooted in the stories of people – from their achievements and discoveries to the dark depths of humanity. For me, it was human emotion at its best and I was hooked.

“My interests quickly expanded to 20/20 with Barbara Walters, 60 Minutes, local news, news magazines, and any investigative journalism show out there. I remember watching the 6 o’clock news on BCTV one day and a switch went off in my head… I knew I wanted to be a broadcast journalist.”

This desire continued to grow and mature as she grew up, finally coming to a critical moment when Sunger would have to decide where to go in college. She had spent considerable time during her high school years shadowing at a local Chek 6 TV station in Victoria by day, hosting a lunch hour radio show, creating a TV show called The Dirt dedicated to community events, and even travelling to Calgary at the age of 16 to spend a day in Southern Alberta Institute of Technology’s broadcast journalism program. It was when Sunger moved to Montreal to complete her journalism degree at Concordia University that things began to fall into place.

“I found myself in Edmonton during summer break and I had convinced the news director at CTV Edmonton to let me come to the station and day shadow the reporters for a week or two. During that time, I was given a chance to write scripts for the 6 o’clock news anchors,” Sunger explains. 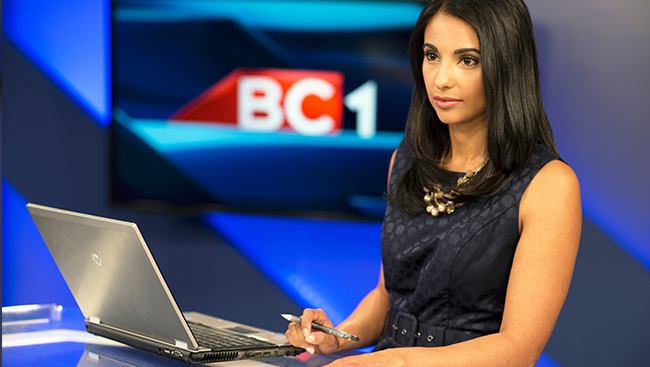 “I loved it. After those two weeks were up I just kept coming back to that same station and soon I started being given regular writing shifts. I decided to stay in Edmonton after that and enrolled in the Radio and Television Arts Program at the Northern Alberta Institute of Technology. By the time I graduated, I was working as a web reporter and on-air reporter. A couple years later and I was one of the youngest anchors at the station. I learned a lot in Edmonton, but I really wanted to head back home to B.C.” Trailing off after that admission, she adds, “In 2012, I found out Global BC was launching a new 24-hour news channel, which brought me to where I am right now.”

When asked about her biggest achievement in her career thus far, Sunger could only point to her current job at BC1. “Our team embarked on an unknown journey when we launched in 2013, creating our vision of what the channel should be. There is so much hard work that has gone into making BC1 what it is today and I am very proud to say that I was part of that original team.  I am also very proud to have my own show on BC1,

Up Front with Sonia Sunger, and I am really excited to watch it grow.  I work with one of the best teams in the business and I know that we have great things in store.”

Renowned humanitarian, Firdaus Kharas, produces animations that can save lives.

Karm Sumal and Manny Bahia are the founders of Vancity Buzz, one of the most popular websites in Vancouver, BC

In Conversation With Riaz Meghji

Riaz Meghji knows how to talk. More importantly, he knows how to talk to you. As Vancouver’s longtime Breakfast Television co-host and creator of EveryConversationCounts.com, the ability to communicate to an audience is essential in his life.

Daksh Kubba is a big supporter of artistically translating the cultural and linguistic similarities of India and Pakistan and this is what he says is the feature of the music produced by Naqsh IPB.