"I passed the hardest moments alone, while everyone believed I was fine.” - Atish Ram

With a surge in COVID19 cases in the midst of the second wave of this unprecedented global health crisis, it is not only a time of reflection but also to hear from somebody who tested positive.

At the early onset of the virus during Spring time, a name that needs no introduction in the South Asian community, contracted this deadly virus. Atish Ram, well known for his 25 years of film, television and philanthropy work wasn't expecting to be one of the first to get infected with covid-19. Ram is the creator, host and producer of Zindagi, a 30-minute high-energy entertainment magazine show running on Shaw Cable. Now in its 25th year and still running, Ram has been able to mentor and train many well-known media and film personalities of today.

As for his film work, Ram has appeared in over thirty Commercials, Television Series and Feature films working alongside Brad Pitt, Johnny Depp, Tom Cruise and Anil Kapoor. It just doesn’t end there, he has also been at the forefront in philanthropy. He has been a passionate volunteer and an ambassador to BC Children's Hospital Foundation. Ram hosted the annual "A World of Smiles Telethon" which ran for 15 years. The Ram's were also one of the first South Asian families from Vancouver to appear on the inaugural season of Family Feud Canada filmed in Toronto in early January of 2020, an episode that went viral. 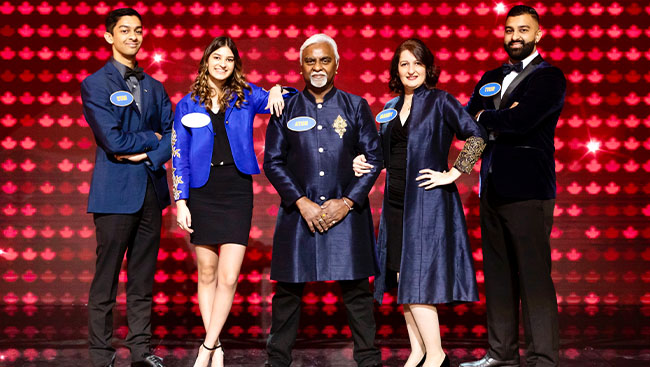 Even though Ram has contributed to his community in immense ways, life also does throw us a curveball. Ram contracted the virus while shopping at a local grocery store in mid March when there were no COVID protocols set up. About five days later, the loss of taste and smell were the first senses that seemed to be affecting him. He didn't think much of it and rather just complained to his wife about her cooking skills. About ten days later, Atish started to get a slight fever and after four days decided to go to the emergency at Royal Columbian Hospital. He was tested for covid-19, treated with an antibiotic and sent home. Two days later he received the shocking news from his doctor that he tested positive for covid-19 and the entire family was to self-isolate. 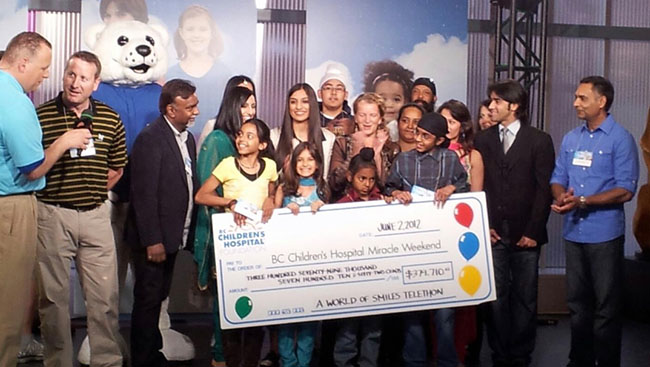 Within five days the virus took a turn for the worse. Ram was unable to fight the continuous fever, struggled to breathe and could barely walk. He decided to go to the hospital and was admitted immediately and was put in critical care. After spending a week in ICU, his vitals stabilized and he was moved to a special covid-19 floor for recovering patients. "I felt much better and thought I would be home by the weekend" but then by the weekend his vital signs dropped with his oxygen levels, heart rate and fever being so critical that he was rushed overnight to Intensive Care. "I kept fading in” and Ram recalled, "the whole day I felt helpless, couldn't move and was gasping for air, it was horrible. I asked the nurse for some water." 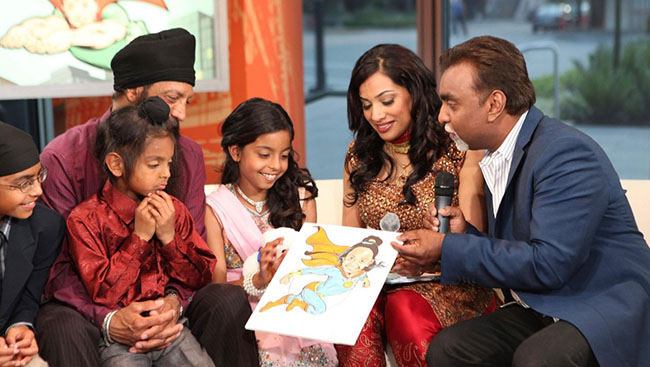 Unknown to him, Ram was critically ill with his heart rate dropping, oxygen saturations dangerously low and his lungs completely invaded by pneumonia. "The nurse came back and tells me he can’t give me water because they are about to put me on the ventilator.""Your lungs are so infected with pneumonia that the Xray looks like someone has taken shattered glass and shoved them in your lungs” explained the nurse. The vitals were so dangerous that doctors were losing hope and didn't think he was going to survive the night.

"The nurse asks me if I have a family?” recalled Ram, to which he said yes. The nurse said to him, “We are going to sedate you a bit so you may be able to talk to them for ten minutes, you need to say what you need to say to them Mr Ram.” Ram texted his wife and briefly explained that he needs to talk to her and the kids on facetime that night. As he lay there for the next five hours wondering if this is how he's going to die. All he could do is look back at his life and ask God why? “Why are you letting me die all alone? Is this how my final hours will be?"

With the help of the nurse, Ram finally made the facetime call to his family. "I tried to stay strong for my family and told them how proud I was with them, to never give up in life and to always give back to the people in need. I apologized to them for not being given a chance to witness milestones in their lives like graduations and weddings. At this point his daughter crying loudly with tears running down her face shouted back at him and said "well then you better not give up on us, Dad you're a fighter you can do this, get better and come home so you can be there when I graduate and walk me down the aisle and give me away at my wedding?" Ram held back his own tears and told them he will always love them and be in their hearts forever and said goodbye, believing that this is now his final hours to live. 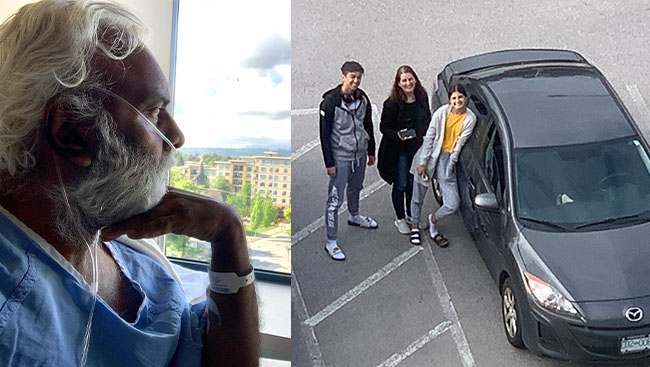 Ram followed up with a text message to his wife explaining briefly what she needs to do once he’s gone, but his wife never responded. Overnight Ram’s vital signs improved and the doctors decided not to intubate him. He would spend the next eight days in ICU with each day fighting to stay alive. He was not able to breathe on his own. His blood pressure and heart rate was dropping while being at a high risk of cardiac arrest or a stroke. The doctors and nurses were constantly monitoring him for life threatening complications. Hooked up to a high flow oxygen machine, three IV drips and around the clock medications to stabilize his vitals, yet there was nothing they could do for the virus that was spreading fast to all his organs. There was no cure or treatment for Covid-19 and the doctors were baffled. 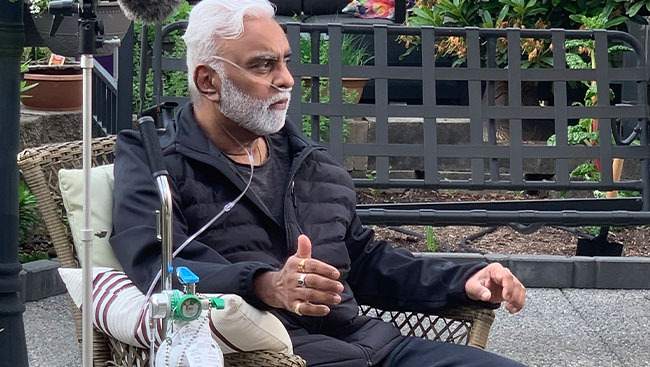 After three weeks Ram was stabilized enough to move back to the covid-19 ward but the complications would continue, from internal bleeding to infections to hair loss and dropping thirty-five pounds. He wasn't able to get out of bed for five weeks but it was also taking a mental toll on him. Isolated in a room by himself with no human contact and only the nurses coming in three times a day to check his vitals and give him medications and food. The doctors would talk to him on the Ipad and he could only be able to facetime his family once a day. "Each morning when I got up I wondered if this would be my last day, so I took a selfie of myself just in case, this way at least my family would get to see the last picture of me." His family came twice to visit him but they could barely see him up on the fifth floor while standing in the parking lot. That was the only contact he would have from his loved ones.

Ram kept his hospitalization private. He didn't want his mother to find out because she was already frail and would worry. "Mother’s Day was very hard because I couldn't call my mom, she would know something was up." recalls Ram.

The nurses would do a covid19 nasal test twice a week on Ram and each time it would come back positive. He needed to get three consecutive covid-19 negative tests to be able to go home. At week six he was able to sit up and had to learn how to walk again but could only take three steps. The virus had been in his body for 75 days and the doctors couldn't understand why. Finally at week seven they consulted with him to try to give him a non-approved drug called Dexamethasone. The risk was high and may cause a lot of complications but at least he was in the hospital so he could get emergency care if needed. Ram realized he had nothing to lose after what he had already gone through. "At this point I had been on constant oxygen, had fought so many battles, so I figured why not give it a try, but now I needed more than ever to call my mother in case something went wrong." 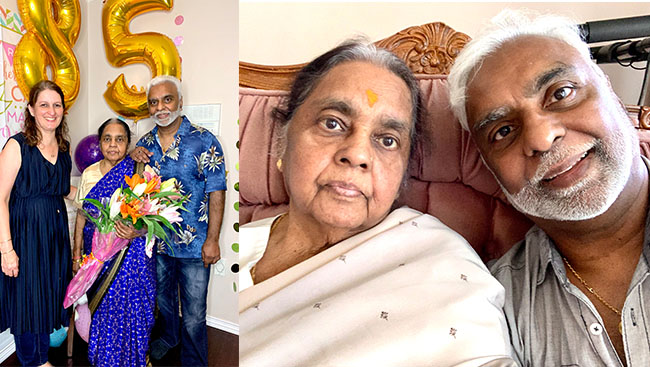 Ram finally called his mom and explained where he was but she didn't take it very lightly. He assured her that he was going to be fine and be back home in a few days. "I tell you the power of a mother’s prayer to their child is quite a miracle," explains Ram, "within that week I tested negative three times every 48 hours and the doctors were ready to send me home." Ram would be discharged after eight weeks, had lost nearly 40 pounds, was quite very weak and required medical oxygen. With a big smile on his face he was welcomed home by his family. "I was afraid to hug them and didn't for two weeks because I was scared to get covid19 again." 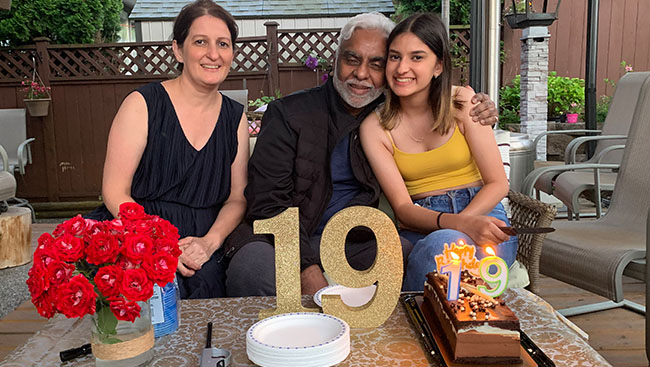 It’s been eight months since Ram contracted the virus but he still has lingering long-term effects. The virus has caused scarring and fibrosis in his lungs, he is still on medical oxygen from time to time. He has developed short-term memory loss, shortness of breath, fatigue and is high risk for a stroke.

Two days after coming home he started to share his experience through TV, radio and different social media platforms in hopes to educate people about the dangers of Covid-19 and how we can all keep each other safe. But there's a much bigger lesson he's learned, "I've learned a lot about life, how short and precious it is, be thankful and grateful for each and everyday, appreciate everyone around you and for the love of God stop worrying about the future because tomorrow is never guaranteed."

“Races do not exist; they are an incorrect construct. Racism, however, does persist. It persists when people try to devalue other people.”