Success is a journey, not a destination for Anita Patil Huberman, CEO of the Surrey Board of Trade, who is the only South Asian CEO of a Canadian municipality’s Board of Trade. Her hard work and innovative ideas have helped re-build the profile of the organization, transforming it into a brand in itself. The talented, determined and ambitious head shares with us her successful journey with the Board of Trade, the challenges and difficulties she faced after taking up the leadership role, and the values that are still deeply rooted in her since the beginning of her career.

Anita Patil Huberman, chief executive officer of Surrey Board of Trade (SBOT), never thought she would actually work for a Board of Trade or Chamber of Commerce. In fact, her parents wanted her to be a doctor.

“My parents in the beginning said you need to be a doctor – that’s going to give you the security that you need,” says Huberman, who has been heading the SBOT since the last nine years.

Huberman graduated from Simon Frazer University with a bachelor’s degree in Communications and a minor in History. Throughout her university days, she worked at the SBOT, which helped pay for her tuition and degree. “I worked one day a week as their tourism information councillor or office assistant, and during summers” she says.

After her graduation, she left the SBOT and started working for the Royal Bank – eventually realising that banking was not meant for her. A job opening at the SBOT got her back to the organization as an executive assistant. “I worked my way up. I applied for the top job nine years ago, and I got it,” says Huberman, who is the only South Asian CEO of a Canadian municipality’s Board of Trade. 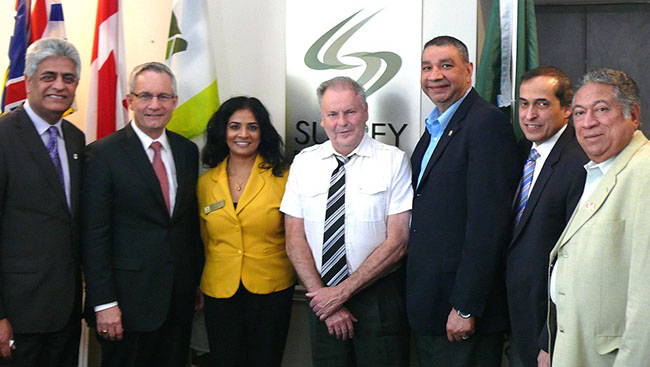 That was the beginning of a journey filled with challenges, difficulties, responsibilities and lots of growth and success along the way for Huberman. It is a given that a CEO’s role is not an easy one. But it was even harder for Huberman for a number of reasons – for one she was very young, and two she was a woman. “I really had to prove myself, because I was never a CEO of an organization before,” says Huberman, “but I had the ability to work hard and for long hours, do innovative things, and make a difference for the organization and for the city of Surrey. The fact that I was a woman made me work even harder, in combination with all the other challenges that I was facing.”

When Huberman became the CEO, the SBOT wasn’t in a good shape. To improve the profile of the organization, Huberman did fundraising and built relationships with different stakeholders and politicians. She re-drafted the whole strategic plan focussing on economic development and workplace development – implementing programmes on labour, immigration and youth. “I have been able to really transform the brand of the organization, and I couldn’t have done it without my team members who are still with me today. We are not only doing networking receptions and events, but we are doing transformative events and government advocacies, and making a difference in terms of how people run their business and how Surrey is seen,” asserts Huberman.

Huberman has been able to achieve a lot for the SBOT. She implemented the international trade center in their office – a common aspect in European and Indian chambers. The SBOT did a couple of trade missions – one to India and a couple to China, and built their relationship with the consulate offices in Vancouver. They have built 12 memorandums of understanding with 12 different countries.

In addition to these achievements, she was able to re-energize the SBOT’s professional development programme. “I knew what needed to be done. I knew what it takes to re-energize the profile of the organization, because at that time [when she became CEO], we really had no brand, and I think I have been able to change that,” says the determined CEO of the SBOT, which is a not-for-profit organization with a common goal of furthering the interests of businesses in the region. 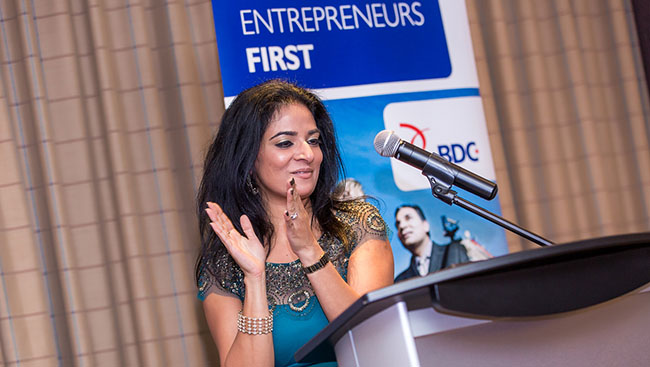 The SBOT’s purpose is to advocate at all levels of government, facilitate networking opportunities, and provide cost-saving benefits and marketing opportunities. It has 2,100 memberships, representing 6,000 business contacts, and over 60,000 employees. “It’s about supporting and attracting business in the city. And we do that through business connection programmes, through our international trade programmes – connecting business locally and through global connections that we have,” explains Huberman.

The organization supports businesses in a variety of ways. Businesses come to the SBOT when they are in need of financing or have some other related problem like transportation. SBOT acts as a facilitator to connections. The team
at the SBOT writes different position papers; on an on-going continuous way they lease and communicate with the different levels of government, thereby supporting the businesses. “That’s only the tip of the iceberg, there’s so much that we do,” adds Huberman.

She states that businesses approach them at different junctures. Existing businesses come to them when they are facing a problem. Sometimes they become members not only when they need the SBOT, but when they know that they
are going to need them later on. “We are kind of like the insurance for the business. We are there as the hidden employee,” says Huberman, adding that one can register their business at the SBOT’s business center.

One of the things that Huberman is proud of doing as the head is bringing the youth aspect into the Board of Trade. The SBOT has a youth leader’s programme that was started by Huberman in partnership with the
Junior Achievement of British Columbia (JABC) and Surrey School Board.

The youth leaders programme involves taking in 350 students through grades 10 to 12 and teaching them how to run a business. They are given access to mentors in business; are taught how to make the business and marketing plan; and how to be a good citizen by giving back to charities when they sell their chosen products. Huberman believes that this programme has helped youth get connected to the community. “They need to feel a sense of belonging, and that there are opportunities after graduation.”

In fact, Huberman’s next goal is to do these programmes with grades five to seven along with the Surrey School Board, as she believes that kids nowadays learn things faster. She points out, “The kids are smart and have access to technology which we didn’t. They also have challenges around work ethic, attitude, values and the right opportunities.”

Success is a journey, not a destination, for Huberman. And each year is a new journey for her and an opportunity to learn new things. One can say that Huberman has enjoyed her journey successfully, receiving accolades along the way. She has taken leadership roles in organizations such as the National Film Board, the Surrey Civic Treasure Committee, the Ronald McDonald House campaign cabinet, and the SFU India Advisory Council, and contributed greatly to charity. Her hard work and success has been recognised through awards and honours like the Business in Vancouver’s Top 40 Under 40 in 2011. “I’m in line to be the Honorary Captain of the Royal Canadian Navy by the Minister of Defence, which will be announced shortly,” she reveals.

Despite reaching the top, she has stayed true to her value of treating and respecting each person equally. Huberman believes that whether it is a small businessperson or someone aspiring to be an entrepreneur who is in school, you
never ignore them; and you never think you’re too good for people. “I don’t believe in that,” she asserts. “In my work ethic, you should always be there for everybody – whether it’s a CEO, or someone that is running a one-person business, or someone that is trying to find their way in life. The SBOT is here to support businesses of today and tomorrow, so you have to be there for everybody.”

Another value that she follows religiously is maintaining a balanced life of work and personal interests. Talking about personal interests, Huberman loves travelling, listening to live music, being with friends, and having  a good time. “I like supporting and surrounding myself with people whom I can learn from and I can trust,” says Huberman, who met her husband Ron while networking through the Board of Trade.

They have been married for 12 years, and Huberman calls her husband her foundation. “If I didn’t have my husband to talk to and vice versa, my mental health would be comprised. I need someone to talk to whom I can trust completely,” says Huberman who turns 40 in a couple of weeks.

Huberman’s mother has been a huge influence in her life. “My mom came to this country and did not speak a word of English. But when I was young, she went back to school. Now she works for a Langara as their office manager or accountant. But she had to fight to get that education and that job.”

Before saying goodbye, she shares some advice for youngsters hoping to be entrepreneurs in the future. “Work hard and surround yourself with people that you trust. Get volunteer experience and practical experience – its experience that counts.

Get connected to your local business organizations and get to know established entrepreneurs. Ask questions, learn and don’t take things for advantage and think you know it all.”

She charmed critics and audiences alike with her breakthrough performance in the critically acclaimed film ‘The Lunchbox’. Fans love to hate her in her recent role as an ISI agent in the popular US TV show, ‘Homeland’. Now Nimrat Kaur is all geared up to begin work on her next project, ‘Airlift’. We caught up with this versatile actor to talk to her about her life-changing role and the journey since.

In an exclusive with DARPAN, Raveena Tandon shares her festive plans for Diwali, what this auspicious holiday means to her, and much more!