The Canadian singer-songwriter — Shivangi Bhayana in an exclusive interview to DARPAN talks about pursuing her passion for music and carving a niche for herself in the city of dreams – Mumbai.

It is one thing to dream and another to chase it all the way to a completely different continent and striving hard every single day until you make your dreams come true. The vivacious songstress — Shivangi Bhayana is a classic example of someone who dared to not just dream but also believed that her dream was something more than a thought and pursued it with such fervour that she is finally living it.

Born in Vancouver, Shivangi was always inclined towards music and it was her relentless love for singing that made her land in Mumbai (India) and transform her passion into a career.“I always wanted to sing,” says the rising music sensation and continues, “I began singing at the age of four. My love for music, at first, led me to sing at small gatherings amongst family and friends. Then it led me to stage performances and the next thing I knew was that this is what I want to do. Finally, I came to India in 2013 wanting to make this my full-time career.” A young girl, coming all by herself to a country which she seldom visited, with no connections whatsoever in the Indian music industry… must have been quite a daunting task. Wasn’t she anxious or nervous? 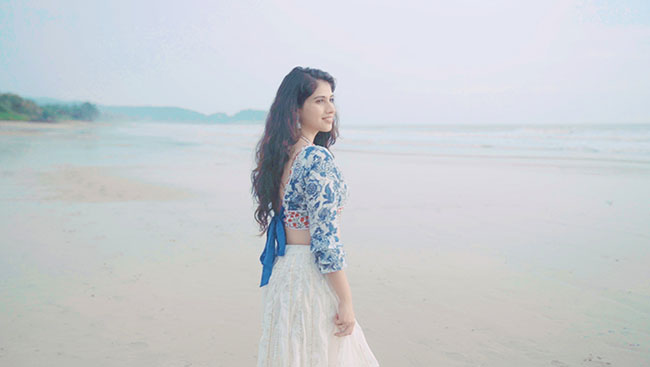 “I was anxious,” admits Shivangi and adds, “I had my fears. I had visited India a couple of times. But I was born and raised in Vancouver, so when I did come from Canada, it was a cultural shock and it was difficult. I couldn’t even cross the road, so it was difficult for me to do even simple stuff. I didn’t know anyone here; I was all alone. Initially, when I decided to come here, I was very excited, and when I got here, I got all anxious. It was only once I reached here that I realized what I got myself into.”

In the last seven years, Shivangi has done some noteworthy work in her field and has paved her path of success. However, the journey definitely wasn’t a piece of cake.
“I didn’t know anyone here in the industry. So, the first year I spent struggling to connect with people but I don’t think anyone took me seriously then. It was only in the second year that people started calling me for work,” recalls Shivangi. She takes a nostalgic pause and continues, “So in my first year, I didn’t do much singing work. Rather I did some small-time acting jobs. My roommate was an actor so she would push me to go for auditions. I did some ads, I did some TV stuff, some short films, some music videos etc., but I had come here for music and I wasn’t getting any work.”

However, Shivangi was resolute to realize her dream and she hung on through all the disappointments until her determination finally paid off. Shivangi says, “Finally, I started getting work in the music industry in my second year here, and my work started to release by 2015. So, in 2015, a lot of my stuff started coming out. I did the Bigg Boss 9 title track; I was the composer and singer for that. Then I have sung the title tracks for some reality shows, I did the anthem song for Flying Machine brand which featured Arjun Kapoor and Vishal Dadlani. In 2016, my first film titled Scandall came out, it was a small film but it was my first. Thereafter, my film journey began. I did playback singing for Great Grand Masti, I sang in Shaadi Mein Zaroor Aana, Love Per Square Foot, Happy Phirr Bhag Jayegi, The Final Exit... I did singles with Indeep Bakshi, Deep Money, Ankit Tiwari. I was the female vocalist for Deepika in Padmavat in the background score. I was the solo vocalist for Kalank in the whole score. I did television singing as well. Last year, I won ITA award for the title track of the TV show Kahaan Hum Kahaan Tum. So, I mean everything kind of happened slowly and steadily and it's continuing that way.”
It is not just in India that Shivangi has achieved such great honours. Back home, the versatile singer, songwriter, and composer has performed in the presence of major political personalities like the former Canadian Prime Minister Stephen Harper, former Fijian Prime Minister Mahendra Chaudhry Mahendra and even Prince William and Kate.

“Yes, I had performed in front of Stephen Harper and Mahendra Chaudhry. I had also got an opportunity to sing for Canada Day, where Prince William and Kate had come. I had also performed during the lead-up event for the 2010 winter Olympics held in Vancouver. Being on that side of the world there is a lot of opportunities. I was lucky that a lot of them worked out for me,” says Shivangi modestly. 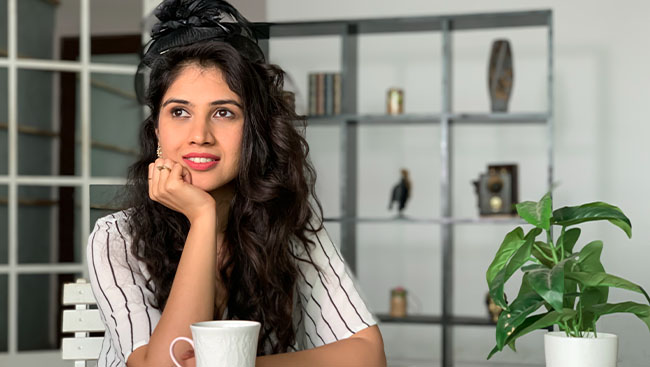 Having earned a name for herself back home, and then coming to a place where she knew no one, dealing with disappointments and struggling for years before things finally started working, must have been quite disheartening. Wonder if she ever felt like packing her bags and going back home?

“When I was in Canada and as I was singing since such a young age, everyone knew me there. The community knew me. I had put in all those years and they were aware of me. But when I came here… no one knew me. So, I was kind of basically beginning from scratch again, and that was bound to happen. I mean everyone who comes here, has to start from scratch… Unless you are lucky and know the people. But the majority of people, wherever they are coming from, all of them have to start from scratch. I was just among the many others. So, sometimes you are like okay I don’t know if I can do this any longer. It is hard. It is hard even now. Every day, I have to go and work, find work because I am self-employed. I don’t have a job. I don’t have a regular thing happening for me. So that happened many times (feeling of wanting to go back home).”

But Shivangi’s persistence and passion for her craft kept her going irrespective of all the challenges. To add to it, the industry can be pretty harsh and one often tends to cross path with the wrong people more often than the right ones, but Shivangi certainly managed to manoeuvre her way successfully through all those hurdles. 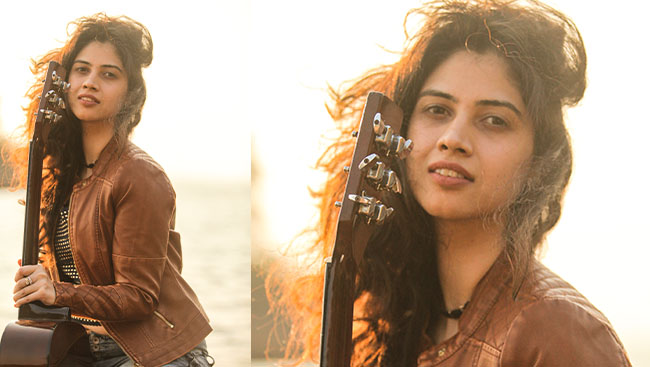 She reminiscences, “I didn’t find the right people in the beginning, I found almost everyone who was wrong. Then I began filtering and I started meeting the right people so I took a very long time. Initially, when I came, I didn’t know anyone, so I would try and connect with people through Facebook. I used to message people and say ‘I am a singer and here is my number, please call me.’ I didn’t know how to do it otherwise. Sometimes out of the 10 people I would meet, only 1 person was the right person who would help me connect with someone in the industry.” She adds, “I am very straight forward, very clear, and very open kind of person, but I think many misunderstood my personality and thought maybe I was open in other ways also. I didn’t understand at first, eventually, I started understanding what was being said and what they were trying to convey and then I got it. I am still very bad at judging people and misreading them but now no one can take me for a ride.”

The fact is when you truly want something nothing can stop you. Like Shivangi’s case, who grew up dreaming to be a singer. Speaking of her early influences, she says, “When you have Indian roots and you are born and raised anywhere outside of India, your connect to Indian culture and traditions mostly happen through Indian films. So, I grew up watching Bollywood films and thought this is how India is. We learned everything about the language, people, the cultures, through films. So, films played a huge role in my life and it was films that got me attracted to music. So, if I was influenced by the artist in the west, I was definitely listening to music in Bollywood and getting influenced by artist like Sonu Nigam, Sunidhi Chauhan, Shreya Ghoshal… I grew up listening to them.”

Shivangi was pretty serious about music from a young age and even took professional training to hone her skills. “I trained in Indian classical in Vancouver. I trained in western music and when I came here, I started doing more Indian classical and I am still learning. I am continuously learning. As an artist you never stop learning,” explains the talented musician.
In fact, that is one advice she would even like to give her fellow Canadians, who wish to come to India to pursue their dreams in the world of entertainment. 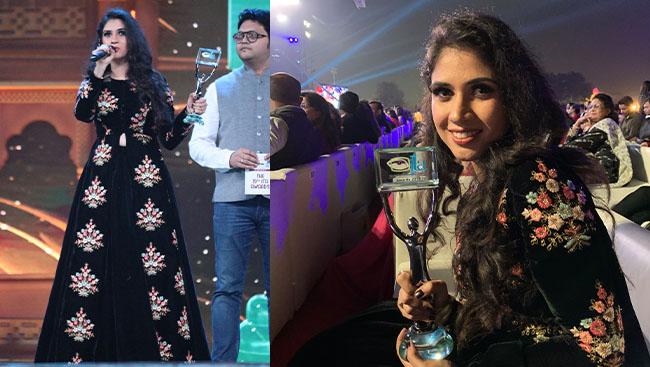 “I would like to tell them - don’t come unprepared. Learn your craft as much as you can. Work on it. Practice. Take training and be prepared because everyone here is talented and skilled. So, you should be proficient in your craft.” advises Shivangi. “Obviously, in the beginning, we all come here to become famous. I don’t think there is anyone who doesn’t, but eventually, on the way you will realize that it is not the important part, what is important is to do good work and develop your craft and become better at your craft. I think that when you focus on your craft and not focus on what it will bring to you, it will bring you success,” she adds wisely.

Commenting about her recent projects, Shivangi excitedly speaks, “I composed music with a friend — Rishi Dutta, for Prajakta Koli (Youtuber)’s short film Khayali Pulao. I also sang the song ‘Mann Ki Titliyaan’ in the film. Then I am working on my independent space because films are not happening right now as shoots are not happening and all my films are on pause. I think this is the best time to focus on it.”

Now that she has finally achieved her dream of becoming a playback singer, one wonders what is her dream now?   “My dream now is not sticking to just singing. I always wanted to keep growing, so now I want to be a composer for films. That is my next goal,” pat comes her reply.   And on that positive note, we sum up the interview.

Her art is unique and refreshing; her style of colourful geometric forms and intricate black and white line work is aesthetically and conceptually inspired by her South Asian heritage.

The versatile artiste talks about dealing with quarantine, the world post COVID-19 pandemic, her roller coaster journey from Canada to Bollywood

I think it’s an honour to be a woman and that our community of women are resilient, compassionate, and fearless leaders.

Being a woman today means using your voice to empower others to create positive change.

A woman achieve her goals because she is compassionate, committed, understanding, and the most able multitasking person.