Moe Khan: Driving you to your dream car

19 Sep, 2016
< >
Moe Khan always had a passion for cars since a young age. The General Manager at OpenRoad Infiniti Langley loved talking about cars with people. “Growing up, I wanted to be in the automotive industry,” shares Khan, who has been a part of the Langley branch since past nine months. Prior to this, he worked as a Sales Manager for eight years at OpenRoad Honda where he was ranked top six out of 308 managers in the country. He also received the Grand Master Sales Manager Award.
OpenRoad Infiniti opened its doors on July 27, 2012, to serve the Fraser Valley communities of Langley, Surrey, Aldergrove, Abbotsford, White Rock, and beyond. The Langley branch has quickly earned a reputation as a preferred Infiniti test drive facility. “We have seen a lot of success since the store has opened,” adds Khan.
Khan’s association with Open-Road Auto Group – the number one automotive retail group by sales volume in British Columbia – goes back about 15 plus years. “I started off as a salesperson at one of our OpenRoad stores in 2000, about 16 years ago,” he reveals. The job, Khan recalls, was a “natural fit.” “I was in sales; I had a passion for cars and wanted to get into the car industry.” 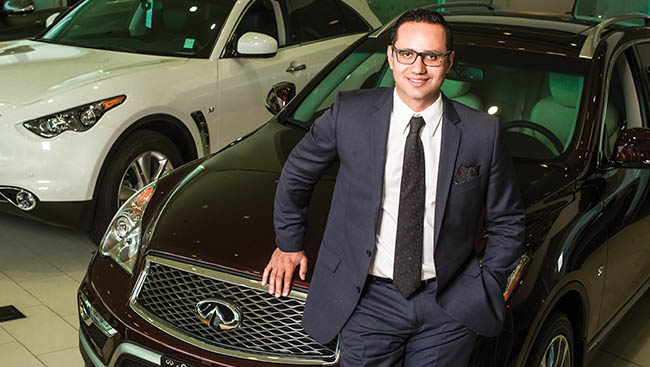 Talking about his vast experience in cars and the auto industry, Khan points out that the automotive industry has really changed over the years. “Now with technology and Internet, people have information about cars. Customers come into the showrooms knowing what to purchase; they do all their research online. Back then, customers went to four to five dealerships before they could make a decision on the car they wanted to buy,” he explains, encouraging consumers to do their research before going to a dealership.
At OpenRoad Infiniti, customer care and a satisfied client-buying experience is guaranteed. “We pride ourselves in having the best automotive professionals in BC to help you with your car buying and ownership experience,” states Khan. Not just the Langley branch, but the OpenRoad Auto Group as a whole aims at ensuring that each customer leaves with a great car deal and experience. “OpenRoad provides a client experience,” proclaims Khan, “We have beautiful showrooms, comfortable furniture, and a selection of beverages. The customer experience isn’t simply about buying or visiting the dealerships.”
It doesn’t come as a surprise then that the auto group has earned a reputation as a people-first organization with consecutive Best Employer in Canada (2012-2016) and Best Managed Company (2012-2015) awards, as well as the prestigious CADA Innovator of the Year Laureate (2012) award. 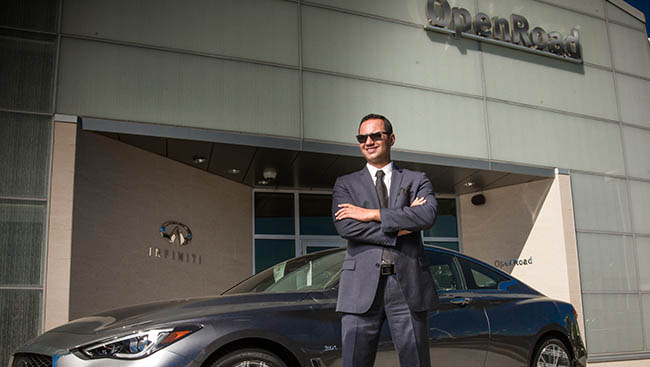 Coming back to cars, an excited Khan discloses interesting details about two new models that will be part of OpenRoad Infiniti soon. The 2017 Infiniti QX30 and 2017 Infiniti Q60 will be on display at the showroom in September. “We are very excited about both these cars,” expresses Khan, highlighting some features of Q60. “The Q60 will be replacing the old G37 which was a very popular model in the Infiniti line up that we had. It’s redesigned, and the Q60 will be available in three different engines – two litre engine and three litre engine with 300 and 400 horsepower. So the Q60 will be the most powerful car we have in the line-up.”
A brand new car, however, comes with a lot of responsibilities – maintenance being one of them. One of the biggest mistakes car owners do, says Khan, is not following the maintenance schedule. “When you buy a new car, it is very important to follow the maintenance schedule for the long life of your car,” asserts the car expert. “A lot of times, consumers take shortcuts and don’t follow the maintenance schedule. Instead, they take the vehicle to their own independent mechanic while it is still on warranty and that can really have negative affect on the longevity of the vehicle.”
To avoid a bad car-buying experience, consult Moe Khan today to get expert advice on a wide variety of cars and deals. OpenRoad also has a Club OpenRoad loyalty program that awards members with reward points each time they service their vehicle. Points can be used towards future vehicle purchases within the OpenRoad group. Members also receive exclusive invitations to guest events and special promotions.

“We aspire to be recognized as the developer of choice for your home purchase. We are working to become a leader in providing affordable yet top quality homes while delivering quality work and products, safety, and on schedule,” asserts Sharma on the vision of Square Nine.

Leave the stress to us while you focus on your recovery. Any kind of personal...

Welcome to Smiletown Dentistry  “Many parents have told us how excited they ar...

KCU serves over 14,000 members from five branches and is ranked in the top 100 credit unions in Canada. It is also the largest financial institution owned by Sikh people in the World.

Bains Pharmacy, is one of the first Indian pharmacies in the region, providing professional medication services since opening in 1994. A full-service clinical, compounding pharmacy, Bains provides personalized, friendly and professional service at low prices.

Delta is rapidly growing. It is this growth that has encouraged many home buyers to make the city...