The auto show included over 1,000 vehicles on display, 50 of those being debuts seen for the first time either in the country, or globally.

If you haven’t heard, Lincoln has spent a lot of time and money in shaking up its portfolio to appeal to a younger, hipper audience, all while still maintaining a reputation for going above and beyond in terms of luxury and convenience. Lincoln’s group vice president, Kumar Galhotra, elaborated on the subject just prior to the start of the event in California. “Our philosophy as a brand for several years now has been to create customer experiences that feel warm, human, personally crafted and effortless, and to remove those little annoyances from our customer’s everyday lives. These are more than just words – we strive to put that spirit into everything we do. And it’s a challenge for a car company, because how do you make a car warm and human?” asked Galhotra.
The answer might lie in the reveal of the 2019 Lincoln Nautilus. This premium utility vehicle is the replacement for the MKX and marks a shift in nomenclature for the nameplate, moving away from a cold alphanumeric system towards meaningful monikers. Robert Parker, director of marketing, sales and service, described the reboot as an opportune time for a change, explaining, “Nautilus is Latin for sailor, so it fits very nicely with the Continental and Navigator. We find it’s easier for consumers to connect with.” The Nautilus retains many of the beloved features of its predecessor like embrace lighting, where certain exterior and interior lights illuminate sequentially as the driver approaches the SUV, and available lumbar massage seats constructed under consultation from orthopaedic surgeons.
New items include a completely fresh front fascia highlighted by a slick, conventionally shaped mesh grille rather than the former split-wing unit; and updated driver-assist technologies including lane-centering and evasive steer assist that can automatically manoeuvre the vehicle around another in an attempt to avoid a collision situation. Power comes via a choice of two turbocharged engines, either a standard 2.0-litre producing 245 horsepower or a 2.7 litre making 335 horsepower and 380 lb-ft of torque, both mated to an eight-speed automatic transmission. 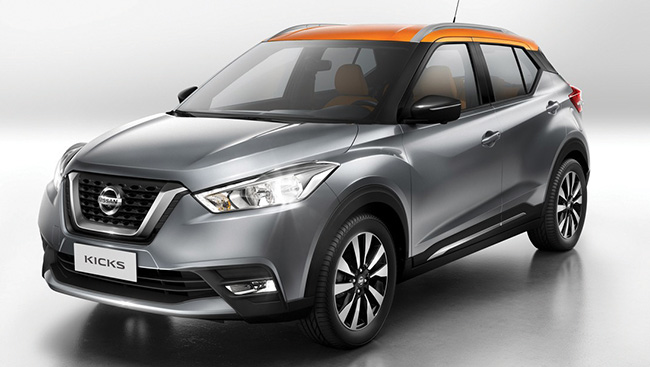 The polarizing Nissan Juke has quietly driven into the sunset to make way for the Kicks, the Japanese automaker’s latest stab at the compact crossover segment.
“As the gateway to Nissan’s adventure-ready sport utility line-up – joining Qashqai, Rogue, Murano, Pathfinder and Armada – Kicks is designed to fit the needs of singles or couples looking for expressive styling, personal technology, smart functionality and advanced safety features," said marketing director Steve Rhind.
All the earmarks of a modern Nissan are present on the shrunken SUV: the signature V-Motion grille, “boomerang” head and tail lamps, and the appearance of a floating roof thanks to contrasting blacked out A, B and C pillars. Rugged wheel arches and a higher stance lend the model some street cred.
Inside, occupants are greeted by what the company calls a “Gliding Wing” dashboard, which is uniquely shaped, covered in black leather, and houses a 7-inch Android Auto and Apple CarPlay-friendly infotainment display inset right in the middle. Split into familiar S, SV and SR trim levels, every Kicks is front-wheel drive and receives a 1.6-litre four-cylinder mill rated at 125 horsepower and 115 lb-ft of torque.

Lexus’ RX line-up continues to prove a fan favourite, particularly among those looking for the practicality of a crossover combined with a dash of style. The 350 and 450h hybrid should become even more popular now that Toyota’s upscale marque is gearing up to produce an extended version capable of squeezing in seating for seven, six if optional captain’s chairs are selected.
Designers have stretched out the body an additional 110 millimetres and modified the tailgate opening to accommodate the extra passengers. Access to the third row is granted via a lever that slides the middle seats forward. People at the very back won’t suffer any loss of comfort since they will have dedicated air conditioning and cupholders.
Performance wise, the 350L still utilizes a 3.5-litre V6 (although curiously producing 290 horsepower, five less than the regular variant) and the 450hL adding two electric motors to the mix generating a combined 308 horsepower. Look for the former to arrive first in early 2018 and the hybrid shortly after.
Prev Next