Medellín has seen one of the most remarkable urban turnarounds in modern history – from a violent past to a popular holiday destination.

When I told my family that I was travelling to Medellín, Colombia, the reactions I received were expected: “What if you get kidnapped?” “That’s a dangerous place.” “Are you sure you want to go there?” If this was over 25 years ago, I most likely would reconsider. Many year ago, Medellín was the drug capital of the world run by the infamous drug lord Pablo Escobar; most of the world knows who he was and Colombia’s reputation had been tainted ever since. So when Medellín was crowned the most ‘Innovative City of the Year,’ in 2013, beating popular cities like New York and Tel Aviv, the Paisa people were beyond joyous and proud. Medellín has seen one of the most remarkable urban turnarounds in modern history – from a violent past to a holiday destination. Mentioned below are some popular hot-spots in the city. 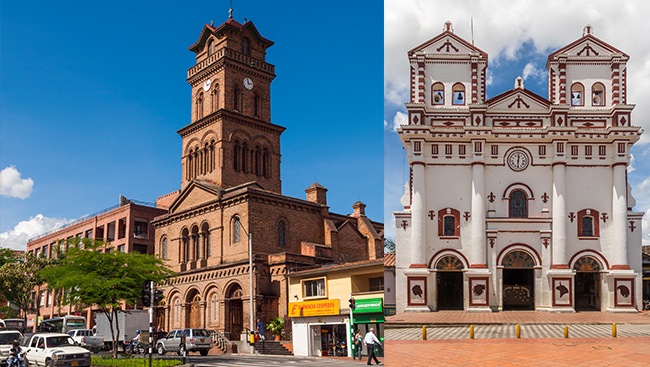 El Poblado is an upscale, diverse neighbourhood that attracts many expats and foreign travellers. The area is filled with many restaurants, bars, boutiques, cafes and a bustling nightlife. A popular hot spot is Parque Lleras – a two-block park in the middle of the neighbourhood that features restaurants, bars, clubs, street performers and music. If dancing the night away isn’t your thing, the park itself is beautiful just to sit and enjoy the surroundings.  Laureles is a quiet and residential neighbourhood. 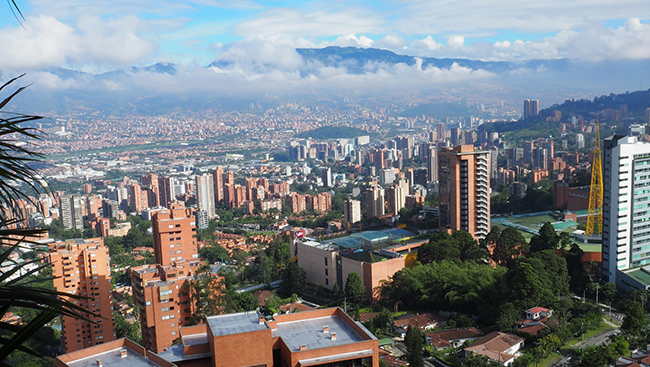 Here you get to experience a more authentic Paisa (people from Antioquia) atmosphere. Laureles is still a bit more upscale than other neighbourhoods in Medellín but the prices are a lot cheaper than El Poblado. You’ll notice many mom-and-pop style operations like restaurants, grocery stores, food stands and much more. Laureles has a more laid-back nightlife which is nice when you want to escape the busy action in Poblado. The streets are more walkable and everything you need is very close to one another, making this the preferred neighbourhood for long-term visitors or for people to live in. 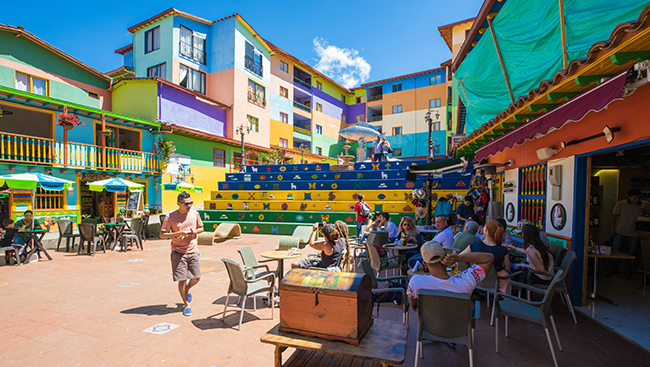 Only an hour an half away from Medellín, visiting Guatapé is well worth it. Easily known for being the most colourful place in Colombia, this town is a big tourist attraction. All the buildings are bright in colour and the designs are intricate and meaningful to the owners. Many designs are cultural images of the farming heritage of the community. Guatapé borders a large reservoir built in the 1970s, and once you climb the famous rock, La Piedra Del Peñol, you will encounter a breathtaking panoramic view of the entire artificial lake. The climb can be tough for some as there are 740 stairs but its well worth the sore glutes!

Located in front of Museum of Antioquia, this park boosts 23 “fat” and “plump” sculptures made famous by local artist Fernando Botero. Filled with lots of shops and restaurants, Plaza Botero is busy with locals, tourists, and street vendors, making this an amazing outdoor exhibit. 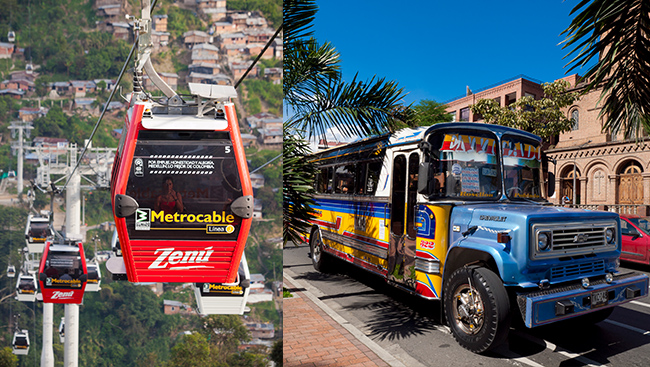 Many people from Medellín are quite proud of their Metrocable gondola lift system. This introduction was a true turning point and an iconic, innovative example of Medellín’s social urbanism and socially-conscious development. Medellín is located in the Aburrá Valley and is surrounded by large, steep hills. These hills house many of the poorest residents, and because of the location, the public transportation system cannot service those areas. The goal of the gondola system was therefore to connect these residents to the main city. Interestingly enough, this has become one of the biggest tourist attractions, as you can see the non-touristy side of Medellín and all the city’s surroundings for very cheap.

Now we all know that South Americans have a reputation for being passionate when it comes to soccer. Even if you’re not a soccer fan, this is one of the most exciting, nerve-racking experiences you’ll ever have. Fans are rambunctious, singing, chanting, dancing, and playing the drums the entire game, and you can just feel the love they have for the sport. The city is home to two teams, Deportivo Independiente Medellín (DIM) and Atlético Nacional. If you happen to be in Medellín when these teams play each other in a “clasico,” you are in for a treat. 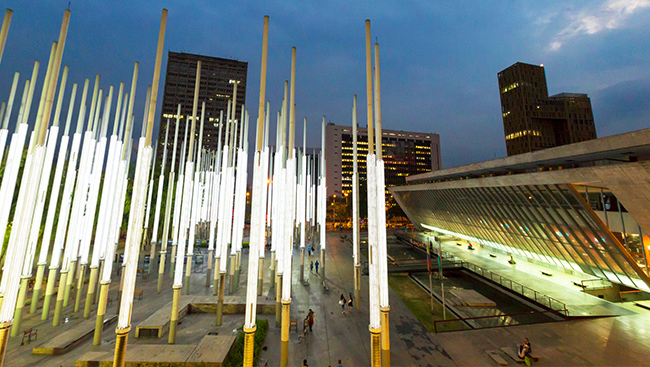 Located in the centre of Medellín, El Hueco may look a bit rough and intimidating but it is one of the best places to shop. You can find anything from shoes and jerseys to furniture and bedding here. If you are good at negotiating, there are plenty of opportunities to bargain. El Hueco is close to Parque de Las Luces, which is a park filled with giant lights that are quite pretty to look at. It’s recommended to visit here with a local as they know the best places to go and will get you the better deals. 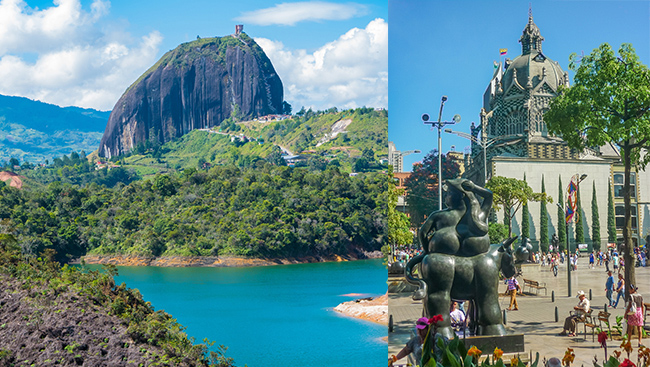 At Medellín, you have the luxury to choose from big chains and boutique hotels to hostels and Airbnb options.

Airbnb is definitely the more affordable route to go. Many homeowners proudly offer their modern apartments in newer high-rise, energy-efficient buildings with beautiful views of the city. This has become a popular option, especially when travelling with larger groups.

Hotel Dann Carlton is a luxury 4-star hotel that is known for its service. The furnishings at Dann Carlton are traditional and tasteful, and the vibe is upscale and classy. The hotel is a popular choice for many visitors travelling for business, and is home to Medellín’s national soccer team, DIM. On game days, you will find most of the players around the pool, gym or in the lobby meeting fans and preparing for their upcoming games.

Diez Hotel celebrates Colombia’s cultural diversity. It is a beautiful, original boutique hotel that exhibits a blend of traditional and modern architecture crafted by some of the finest local artisans. As soon as you walk through the entrance, you’re immediately put at ease with all the Zen fixings surrounding the lobby. Although this hotel focuses on its environment to be harmonious and peaceful, its houses tech-savvy amenities to keep you connected.
Prev Next

Paradise Awaits: Breathtaking BC Islands to Summer On

Deciding to keep your summer plans close to home this year?

Paradise Awaits: Breathtaking BC Islands to Summer On

Kiix̣in is a National Historic Site of Canada

I had forgotten how stunningly beautiful Madrid was, but coming back after two decades, I quickly remembered.

My first stop in España was the captivating seaside city of Barcelona, where you can get lost in the eclectic arts, culture and dining scene.

Take advantage of the slightly warmer weather and those lovely extra hours of sunlight this season by exploring Vancouver’s beautiful backyard with these fun and affordable day trips!

Getting Around the Airport on March Break

With such huge crowds, carting the family off to the airport may seem daunting, but it doesn’t have to be.

Getting Around the Airport on March Break