Darpan News Desk IANS, 13 Jun, 2018
Actor Sanjay Dutt says acid attack survivors are real-life heroes and an inspiration to all.
Sanjay on Wednesday visited Sheroes Hangout cafe here after receiving an invite from the team through Twitter. Overwhelmed by the invitation, he made sure to spend some quality time with acid attack survivors who run the café.
"They are real-life heroes and these strong women are an inspiration to all of us. They have shown unwavering strength to fight and survive in the most difficult situations," Sanjay said in a statement to IANS. 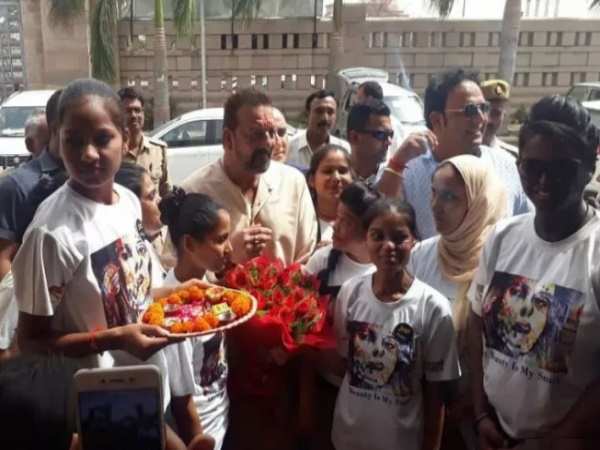 "It is truly an honour to be receiving the love and support of such beautiful souls," he added.
Sanjay is shooting for the Hindi remake of the Telugu cult classic "Prasthaanam" here.
To be produced by Sanjay Dutt Productions, the film is being remade in Hindi by filmmaker Deva Katta, who also helmed the original. The shooting began on June 1 on Sanjay's mother and late actress Nargis' birth anniversary.
The film also stars Satyajeet Dubey, Ali Fazal, Manisha Koirala and Amyra Dastur.
Prev Next

Fitness To Me Is A Way Of Life: Rakul Preet

She has pushed her limits to get the right frame for her role in romantic comedy with Ajay Devgn. In fact, she flaunted her washboard abs on the cover of a health magazine.

Fitness To Me Is A Way Of Life: Rakul Preet

Fire Breaks Out At Deepika Padukone's Building, The Actor Confirms She Is Safe

At least 90 residents were evacuated safely after a fire broke out on the 33rd floor of the Beaumonte Towers in the posh Prabhadevi area of Dadar here on Wednesday afternoon.

Fire Breaks Out At Deepika Padukone's Building, The Actor Confirms She Is Safe

Bollywood actor Armaan Kohli, who is accused of assaulting his girlfriend, was arrested by Mumbai police on Tuesday

Everything Not Yet Fair, Square For Outsiders In Bollywood: Taapsee Pannu

"It's wonderful to see that the times have changed and being outsiders you are getting a decent amount of opportunities which are better than what it was before.

Everything Not Yet Fair, Square For Outsiders In Bollywood: Taapsee Pannu

Actor Varun Dhawan says that it is high time Indians stop looking at the West for heroes as we there are a number of legends within their own country.

My Appearance Is Not A Source Of Insecurity: Lisa Ray

Indo-Canadian actress Lisa Ray, who likes to call herself a cancer "graduate" after surviving the disease, never feared over her looks after chemotherapy sessions. She says her appearance is not a source of insecurity for her.

My Appearance Is Not A Source Of Insecurity: Lisa Ray