The girl, who rose to fame thanks to social media, sure gets targeted a lot by it. Priya Prakash Varrier has once again received severe trolling and this time it was for a caption ‘goof-up’.

With over seven million followers on Insatgram, Priya is pretty active on all her social media accounts. But, currently she is having a nightmare after her now-deleted post that went viral for all the wrong reasons.

The young diva shared a picture promoting a new perfume brand. Instead of the picture being the focus, the goof-up that she made with the caption gained all the attention it needed. 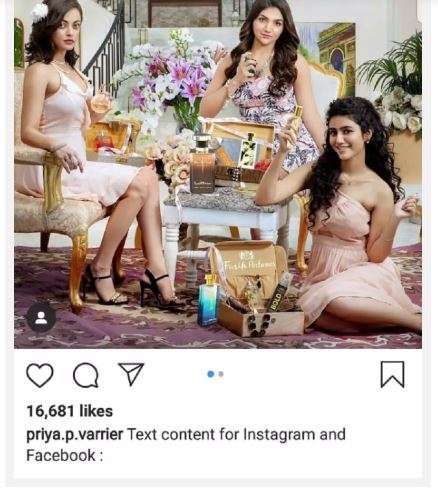 The cut, copy and pasted caption caught the attention of her all her followers and stirred a lot of savage comments on social media. The actress was quick enough to realise her mistake and rectified the caption, netizens swiftly started trolling her.

On the work front, Priya will soon be making her Bollywood debut with Prasanth Mambully's 'Sridevi Bungalow', which is already in the centre of a controversy.

Priyanka Chopra Jonas has fans all around the world. Her loyal fans made the sweetest gesture for her while she was leaving the Jonas Brothers concert in Atlanta.

Now he is ready for a multi-starrer like "Kalank", produced by Karan Johar and directed by Abhishek Verman.

Supermodel-actor Milind Soman and his wife Ankita Konwar are giving major couple goals with their sizzling chemistry amidst the serene beaches of the Maldives.

Actor Ayushmann Khurrana is ecstatic about the golden run of his film "AndhaDhun" in China. He says it proves how cinema goes beyond language and borders.

Megastar Amitabh Bachchan is upset that not enough has been said on the "silent success" of his latest film "Badla", directed by Sujoy Ghosh and produced by Shah Rukh Khan.

Farhan Akhtar has donned several hats in his career—that of a filmmaker, a producer, an actor and a singer—but two years ago, he chose to take a break from everything else to focus on music.