Actress Kajol took to Instagram to share pictures of her daughter Nysa, calling her a "happy pill". The post left social media users gushing about Nysa's resemblance to her mother.

Kajol has shared pictures, presumably from a candid photo-shoot. In the photographs, Nysa is seen dressed in a golden lehenga, paired with an embellished and sequined blouse and a golden ruffle dupatta. Keeping her hair open, she completed her look with traditional jewellery. She was seen posing happily for the camera, flashing her flawless smile. 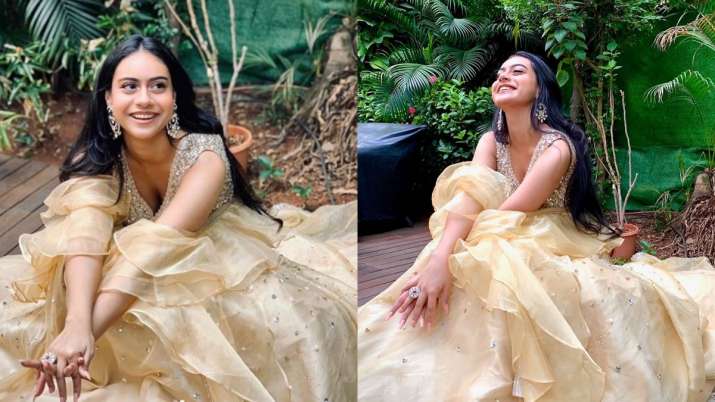 "In the times of fear we are in right now we all need a happy pill. Thank you for being mine. #babygirl #allmine #smilemore," Kajol wrote along with the pictures.

Kajol's fans loved the pictures and showered the 16-year-old with love. Kajol's sister Tanishaa Mukerji commented to the post, "My princess" along with several kiss-eye emojis.

A fan wrote, "absolutely gorgeous", another posted: "So beautiful". Many also dropped heart and fire emojis in their reaction to the post.

"I thought it was Kajol," said one user, while another posted: "The Apple doesn't fall far from the tree!!! You look just like your mom."

Meanwhile, in a previous interaction, Kajol talked about Nysa's career plans, saying: "She (Nysa Devgn) is just 16 years old. I think you (media and people) can give her a break and some space. Recently, she has celebrated her 16th birthday. Right now, she is studying in 10th Standard and she is preparing for her board exams."

When Deepika Opened Up On Relationship Woes

Actress Deepika Padukone is married to Ranveer Singh now but there was a time when she went through a lot of stress in her personal life, in a series of early relationships that included Ranbir Kapoor.

When Deepika Opened Up On Relationship Woes

The wait for Akshay Kumars "Sooryavanshi" just got a bit longer. The film has been delayed indefinitely amid the coronavirus scare.

Manoj Bajpayee: Almost Lost My Life While Shooting '1971' In Manali

Manoj Bajpayee: Almost Lost My Life While Shooting '1971' In Manali

Karan opened up on the "The Kapil Sharma Show", where he appeared with filmmaker Rohit Shetty to promote their upcoming co-production "Sooryavanshi", starring Akshay Kumar. Johar also opened up on Shetty.

With the global film industry facing losses of over $5 billion, will the coronavirus scare have a trickle-down effect on India as well, particularly Bollywood?

Neena Gupta: I Still Have A Fear Of Being Out Of Work

Asked if she still has the fear of being out of work, the 60-year-old artiste laughed.

Neena Gupta: I Still Have A Fear Of Being Out Of Work