Actress Sonam Kapoor Ahuja on Thursday reminisced about the time she used to travel by train with her family.

Sharing an old childhood photograph from one of her train journeys, Sonam took to social media and wrote: "There's something very unique about train journeys. From passing sceneries to sharing meals and having a sense of community, I really miss taking the train sometimes - our very own version of a family road trip."

In the image, the "Neerja" actress is seen posing while lying on the upper berth of a train.

There’s something very unique about train journeys. 🚂 From passing sceneries to sharing meals and having a sense of community, I really miss taking the train sometimes - our very own version of a family road trip. #ThrowbackThursday #TBT #RoadTrip

Sonam even made her husband Anand Ahuja nostalgic as he then shared his favourite train moment too.

"I also love trains...Let's go na, soon? The last time I went by rail was to Rishikesh but my most memorable one was to Bandhavgarh...Some 14-hour long trip with 40 classmates," Anand commented on Sonam's photograph. 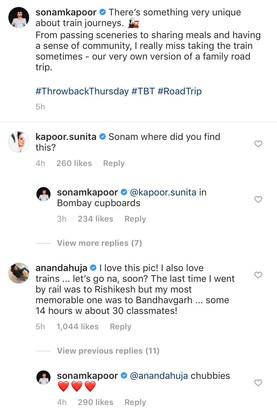 The couple got married in May last year.

Sonam recently turned 34 and hosted a grand party for her family and friends from the film industry. On the work front, she is gearing up for the release of "The Zoya Factor".

A childhood photograph of actor Hrithik Roshan, Alia Bhatt and Masaba Gupta at a party together has surfaced on social media which has left their fans excited.

"Bharat" actress Katrina Kaif, who has been lauded for her evolution as an artiste, believes in being detached from the end result and to keep working on her craft to be better with every film.

Actor Shahid Kapoor says working on "Kabir Singh" has been extremely challenging for him -- emotionally and physically.

Actress Vaani Kapoor is giving major vacation vibes and body goals with glimpses from her exotic vacation with her girl gang.