For the 97th year, the Vancouver International Auto Show (VIAS) descended upon the Vancouver Convention Centre at the end of March to bring out the latest and greatest products in the automotive world. A record-breaking 115,608 visitors checked out the event over six days featuring a lot of luxurious and sporty sedans, as well as a North American debut of a completely new Range Rover offering. Darpan has rounded up the best of show for you.

The Lower Mainland’s reputation for being a proponent of green living is perhaps why the Japanese automaker chose to reveal the hybrid variant of its next-generation flagship LS here. Utilizing the Lexus Multi Stage Hybrid System also seen in other models like the LC 500h, the powertrain is made up of a 3.5-litre V6 gasoline engine, two electric motors and a 10-speed transmission. Total output is 354 horses.
The LS 500h is the built on the stiffest platform yet: the new GA-L architecture for luxury vehicles. Additional technology such as the Vehicle Dynamics Integrated Management, which can control integral driving systems from steering to braking, ensures the best possible motoring experience.

Back in January, Kia unveiled the very first grand tourer to grace its lineup at the North American International Auto Show in the Motor City. Vancouverites finally got an opportunity to view the five-passenger stunner up close, a car often heard described by attendees as being beautiful. Boasting a fastback profile, a long hood and an extended 2,905-millimetre wheelbase, not to mention a bold shade of red, it’s easy to understand the sentiment.
There will be two engine choices at launch in late 2017, both still under development. A base 2.0-litre turbocharged four cylinder creating an estimated 255 horsepower and 260 lb-ft of torque, and a 3.3-litre twin-turbo V6 expected to push out 365 horsepower and 376 lb-ft of torque. The latter would be good for a 0-100 km/h time of 5.1 seconds and a top speed of 268 km/h.

It’s been over a year now since Hyundai Motor Company birthed Genesis, an independent luxury brand targeting a slightly different, wealthier demographic. The New York Concept represents an introductory attempt at a hybrid sports sedan intended to take on the likes of the BMW 3 Series. The contemporary looking four-seater was apparently inspired by a blend of modern luxury lifestyle and products and forms found in nature.
Unique details include pixelated “light guides” inside the sharp headlight housings, honeycomb air vents carved into the front fenders and copper accenting throughout. Inside, occupants are treated to a sea of tan and anthracite leather, and a floating 21-inch curved high-resolution 4K display capable of recognizing multi-finger inputs, handwriting and gestures.

BMW is getting set to roll out the initial M performance version of the current 5 Series. The fire-breathing car packs a specially-modified 4.4L TwinPower Turbo eight-cylinder motor churning out 455 hp and 480 lb-ft of torque, mated to a Steptronic Sport eight-speed automatic gearbox and rear-biased xDrive intelligent all-wheel drive, making the M550i the fastest 5 Series ever.
One of the best parts of a M-badged model is the many interior and exterior upgrades that truly set it apart. The M550i receives an aero kit consisting of more aggressive bumpers, side skirts and rear spoiler and inside, Black Dakota leather-trimmed seats with blue contrast stitching and a special matching steering wheel.

The Range Rover family grows a little bit bigger with the addition of the Velar, a mid-size SUV closing the gap between the smaller Evoque and the Range Rover Sport, touching our shores for the first time at VIAS. The company has taken a “reductive” design approach, giving the vehicle exceptionally clean lines devoid of clutter. For example, the door handles are hidden à la F-TYPE and the bumper covers are smooth and perfectly rounded.
Although pretty, the crossover is fully capable of getting dirty. All-wheel drive is standard, and an optional air suspension kit provides a 251-millimetre ground clearance and a 650-millimetre maximum wading depth. The 2018 Range Rover Velar will be available in eight trim levels and 12 different paint colours when it goes on sale in a few months.

Saying that fans of Honda, Japanese sports cars or just automobiles in general have been waiting for the ultra-high-performance Type-R version of the latest Civic to become a reality would be a gross understatement. Many details on the car hint at its racy heritage, like bulging body panels, winged splitter mounted underneath the front bumper, red accents
and badging, smoked headlamp housings, piano-black 20-inch wheels and a towering rear trunk spoiler. The car is reported to retail for an MSRP in the low $40,000 range when it arrives this summer. 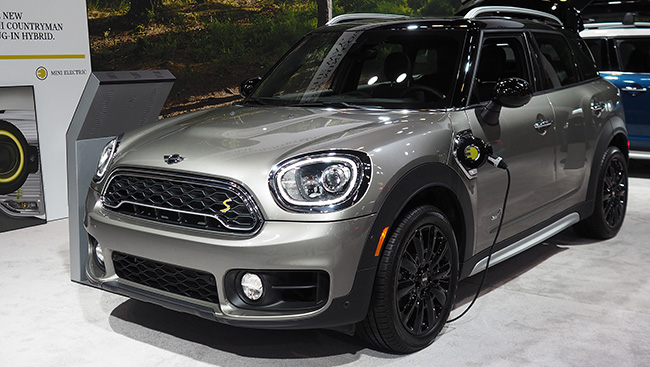 For the first time in the brand’s history, MINI is about to go plug-in hybrid with the Cooper S E Countryman ALL4. The large MINI hatchback will feature emissions-free technology that allows for pure electric driving, and the company has promised no changes to the fun-to-drive nature of the car. The electric motor powers the rear wheels while a 1.5-litre three-cylinder gasoline engine drives the front. The total power output is 221 horsepower and 284 lb-ft of torque that can get this Countryman from 0 to 100 km/h in less than 6.8 seconds. Unlike some other hybrids, the MINI is not limited to slow speeds when running on pure electricity and can reach speeds of up to 80 km/h in AUTO eDRIVE mode, or 125 km/h in MAX eDRIVE.
Prev Next