The cooling inlets beneath the signature twin-blade grille are blacked out and connected via the “A-wing” front spoiler that increases and better directs airflow.

Calling the 2017 C63 S Coupe the “sportiest C-Class ever,” as Mercedes-AMG has done, is a big statement, as the outgoing version launched in 2011 wasn’t exactly a boxy slouch. But the redesigned vehicle is even more impressive, with bodybuilder-like bulgy proportions that somehow at the same time appear elegant, an overall wider footprint, and a fire-breathing 503 horsepower.
Tobias Moers, board of management chairman at Mercedes-Benz’s high performance division, says the big improvements seen on the 2017 model are all about pushing the envelope and keeping the C-Class the best selling AMG model. 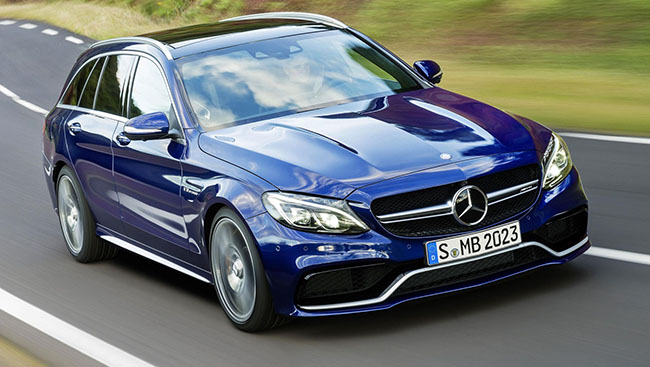 “The new AMG C63 Coupe embodies our conception of progress: It offers impressive longitudinal and lateral dynamics at an extremely high level along with improved fuel economy,” says Moers.
“In addition, we are making a bold visual statement with the muscular design. Our customers can therefore experience the progress with each of their senses – seeing, hearing, feeling and, above all, driving.”
Although it’s technically a C-Class, it only shares the doors, roof and trunk lid with the standard non-AMG variant. Because of the car’s increased track width, the fenders are flared out measuring a full 64 millimetres wider up front and 66 mm at the back, allowing the use of bigger tires for more road grip.
Line up a regular C and the C63 S and it’s immediately evident how much more aggressive the nose of the latter is. The cooling inlets beneath the signature twin-blade grille are blacked out and connected via the “A-wing” front spoiler that increases and better directs airflow. Taking a cue from the S-Class Coupe at the rear, a finned diffuser has been added to optimize aerodynamics. 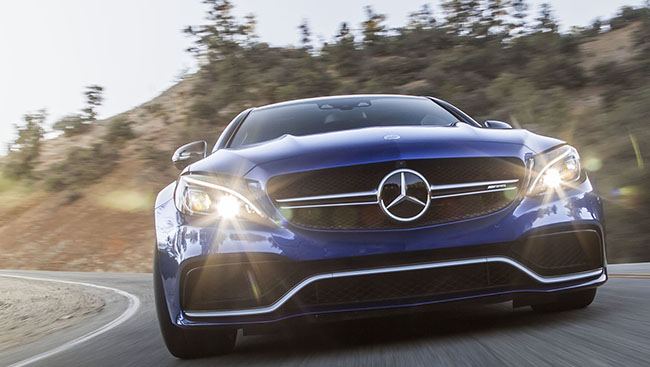 The interior of the sedan is refreshingly minimalistic: the entire piano black centre console is one flowing piece from the floating display all the way down to the armrest. There isn’t an overwhelming array of buttons or switches either, only the essential ones are present. The leather steering wheel is flat bottomed with a centre stripe reaffirming the vehicle’s sporty nature. The optional Burmester surround sound stereo, my favourite in the industry, sounds beautiful, as always.
The 4.0-litre, eight-cylinder bi-turbo engine underneath the hood is the same powerplant found in the AMG GT S, so you know it means business. Mated to a multi-clutch seven-speed transmission, the C63 S can go from 0 to 100 km/h in a blistering 3.8 seconds. The monstrous 516 lb-ft of torque that comes on at 1,750 will literally take your breath away – especially if driving in the rain, as I did during a brief shower. Keeping the car moving in a straight line was nearly impossible.

The C63 has a reputation for producing some truly great noise, and the 2017 C63 S continues the tradition. When the performance exhaust is equipped, pressing a dedicated button opens up electronically-controlled bypass flaps sending a rumbly note streaming out of the twin chrome-plated tailpipes. The sound also changes depending on AMG DYNAMIC SELECT transmission mode currently active ranging from standard to the S-trim-exclusive Race setting.