DARPAN’s tester was the highest Signature grade including all the bells and whistles.

In true Mazda fashion, the Japanese manufacturer has released an updated Mazda6 – that looks just like the previous one. Well, if you look closely, the subtle changes will begin to pop out, most of them lending a more premium feel to the car, and we will explore this further below. However, the biggest news is the addition of a turbocharged version of the 2.5-litre SKYACTIV-G motor, similar to the one found in the CX-9 crossover, giving the flagship sedan a serious boost in power.
The most eye-catching element of the exterior update is definitely the grille. Gone are the horizontal slats, replaced by a grid of small 3-D blocks that looks different depending on the angle it’s viewed at due to reflecting light. The grille surround is also taller, and the winged element now flows from the frame outwards at a near 90-degree angle, cradling the slimmed-down headlamp lenses. The foglights have been integrated with the rest of the forward lighting, and in their place are ducts to channel air towards the front tires for reduced drag.
At the rear of the vehicle, the bumper is a solid colour rather than two-tone. The dual exhaust tips are larger in diameter and pushed further apart creating a wider appearance. The chrome wing above the license plate recess bleed into the reshaped tail lamps themselves, complementing the design of the front fascia. Overall, the entire outer packaging just feels upscale yet understated, a purposeful move as Mazda is slowly pivoting towards becoming a more luxury-oriented mainstream brand. 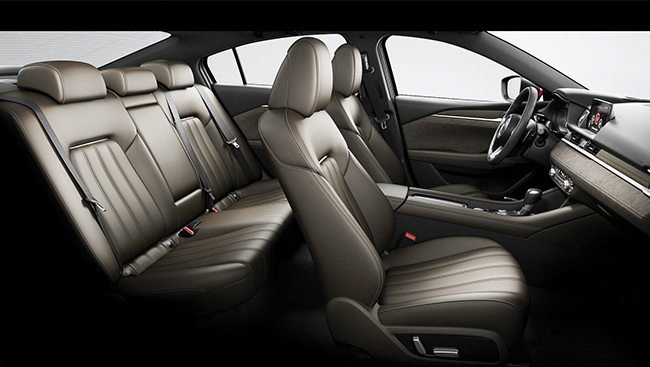 This trend carries over to the interior, and a perfect example is in the seating. Mazda states they have done away with the sporty bucket-style in lieu of wider cushions and thicker, sculpted padding in order to “create a comfortable and inviting look that befits a flagship model.” DARPAN’s tester was the highest Signature grade including all the bells and whistles. The seats are finished in buttery Nappa leather – available in different shades, for example the dark brown Deep Chestnut on ours – and the door trim and instrument panel crafted from Japanese Sen, a special type of wood often reserved for Japanese furniture and musical instruments. The dashboard is covered in a beautiful soft-touch leather-like material called Ultrasuede created by Japanese textile and chemical company, Toray Industries. Hits of satin chrome (real metal, thank you!) can be found on the seatbacks, steering wheel and paddle shifters.
Unfortunately, not much has changed in the infotainment department, where commands are handled by a rotary control knob. It is fine for the most part except while trying to perform simple tasks such as quickly switching between radio stations, requiring the user to tediously navigate through submenus.

Saving the best for last, the Mazda6 returns with the choice of two engines. There’s a revised naturally aspirated 2.5-litre four-cylinder gaining the ability to deactivate unused cylinders during light cruising conditions, between 40 and 80 km/h, to increase fuel efficiency. All-new to the model is a turbocharged 2.5-litre direct-injection mill making 227 horsepower and 310 lb-ft of torque, giving a lot more power on tap when needed and even producing a bit of a growl when the throttle is applied in a spirited manner. Another reason to get excited: when the latter is running 93 octane fuel, the horsepower number jumps to 250.
The caveat to everything is the cost. Although the base trim starts $27,000, the MSRP on our press vehicle was $38,800.

Once the car is up to a certain speed, the engine starts and begins to turn the electric motor and takes over the powering of the car.

All X1s come with xDrive intelligent all-wheel drive, perfect for our cold and wet Canadian climates.

The wave of pure electric, hybrid and other fuel efficient vehicles continues to get bigger, as evidenced by the Automobile Journalists Association of Canada seventh annual EcoRun event held in June.

Over the past 10-years I have become a real fan of the Cadillac line of vehicles as they are attractive and excellent handling and ridding vehicles.