There’s nothing Volkswagen loves to do more than pay homage to past successes – particularly those of the iconic Beetle – with special edition vehicles, and that is how the Beetle Denim convertible was born.
Influenced by the 1970s “Jeans” Bug, its name tells the full story. The regular 2016 Beetle has undergone a thorough inside-out denim treatment to look and feel like your favourite pair of Levis. VW deserves a tip of the hat, because the automaker hasn’t just slapped on a different badge and called it a day. For instance, the convertible top is made out of a textured fabric that resembles the same cloth a pair of jeans might be cut from.
Entering the interior is an experience akin to slipping into said jeans. The speciality fabric finds its way onto the seat coverings as well, and the bolsters feature pants-like pockets, including red tabs shaped like a Bug, you can put a notebook or some sunglasses into. In addition, the dash is finished in a light blue and silver colour.

Underneath the extra bits of styling is the same redesigned vehicle that, if you haven’t driven one since the original New Beetle, is now sleeker and less bubbly. The roof has been lowered (headroom hasn’t suffered still offering 942 millimetres) and the track and wheelbase have both been stretched wider for a sportier rather than cuter appearance.
Stepping back into the cabin for a moment, occupants should notice the absence of a certain vase that previously contributed to the car’s perception of being female-centric. At a time when storage space seems to be shrinking in many models, the Beetle has a unique two-glovebox setup. The first sits on top of the dashboard with a flip-up lid, the second below opens downward as per usual.

The new Volkswagen “MIB II” infotainment system, incorporating a faster and higher resolution 5.0-inch touchscreen display, is a big change for all 2016s regardless of trim. As recently as two years ago the vehicles didn’t even have USB inputs, and now support Android Auto and Apple CarPlay connectivity.
One engine is provided as standard – a 1.8-litre turbocharged TSI four cylinder producing 170 horsepower and 184 lb-ft of torque, mated to a six-speed transmission. The specs aren’t overwhelming, but maximum torque is achieved at a low 1,500 rpm. That was enough to surprise me when leaving a stoplight a couple of times by breaking the front drive tires loose. 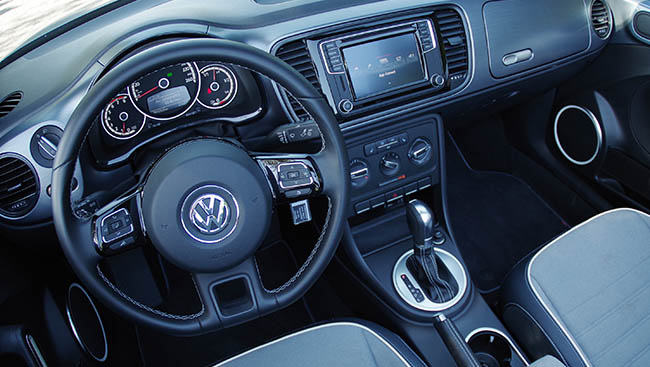 I was surprised to discover the Beetle weighs approximately only 1,366 kilograms, although it makes sense given how sprightly the car handles on the road despite missing the structural rigidity of a roof. Following along a curvy mid-to-high speed road, no significant understeer was exhibited and I could have easily pushed harder with little issue.
The 2016 Volkswagen Beetle Denim is available in two colours: Pure White or Stonewashed Blue and limited to a production run of 2,000 units.