Farewell, Mercedes-Benz GLK – there’s a new kid on the block: the bigger, younger, lighter and better-looking GLC 300 4MATIC. This turbocharged crossover hits the ground running poised to compete with current heavy hitters in the segment that include the Audi Q5, BMW X3 and Lexus NX, Range Rover Evoque and Lincoln MKC, to name a few.

Starting production in October of last year, the GLC has a long way to go before approaching the 600,000-plus units sold reached by the GLK during the last eight years. On appearances alone, however, it should be a doable task given the vehicle’s good looks blending the go-anywhere ruggedness of the original GL, combined with wind-swept body panels, and the signature sporty look of the German luxury manufacturer’s current lineup.

All GLCs benefit from a large two-slatted grille housing a large three-point Mercedes-Benz emblem, sitting above a silver colour off-road-inspired front skid plate garnish. The headlamps house halogen low/high beams with eyebrow-shaped LED daytime running lights that really stand out when you see them on the street, especially amongst the sea of generic looking DRLs. Up above, there are aluminum roof rails ready to take on additional cargo, and are complemented by matching aluminum running boards below the doors to ease entry and exit. 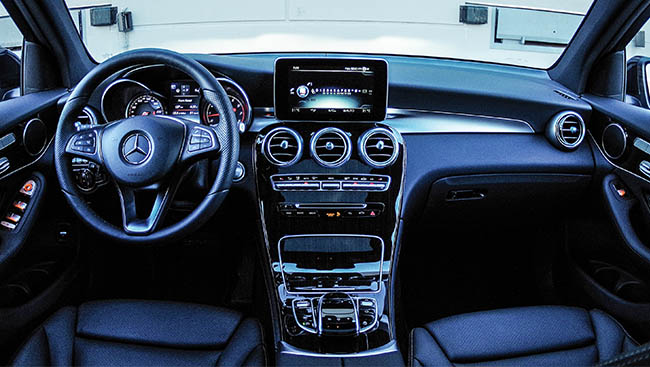 Footprint-wise, the GLC slots in-between the company’s GLA subcompact crossover and bigger brother GLE “Coupe,” the mid-size replacement for the former M-Class. At 1,880 millimetres wide, 4,648 mm long and 1,638 mm high, the size is liveable and doesn’t cause too much of a headache when parking, fitting quite well even in a cramped apartment underground parking space. Makes sense when you consider that the GLC is approximately 152 mm shorter and lower and more than 25 mm narrower. As such, cargo area is nearly half that of the bigger SUV, 580 litres vs. 1,000-plus litres.

Like most Mercedes-Benz products, the interior is all class. A meaty three-spoke Nappa leather-covered steering wheel awaits the driver, and infotainment is delivered via a seven-inch non-touchscreen controlled by a touchpad on the centre console. Subtle dark wood trim in brushed aluminum accents are strategically scattered throughout the interior.

You may notice as you slide onto the seats that the experience is a little different than when sitting in a more expensive offering higher up in the M-B food chain. The official literature states the upholstery is finished with what they call Artico leather, which is in fact not made from cowhide and is pretty obvious to the eye. While this might be considered less luxurious, it is more environmentally-friendly, a quality increasingly sought-after by modern-day customers.

Under the hood lies a 2.0-litre turbocharged inline-four that generates 241 horsepower and 273 lb-ft of torque, mated to a 9G-Tronic nine-speed transmission. Considering it weighs 1,765 kilograms, the powertrain moves the crossover along sufficiently, although there is a hint of turbo lag when you step on the gas pedal. 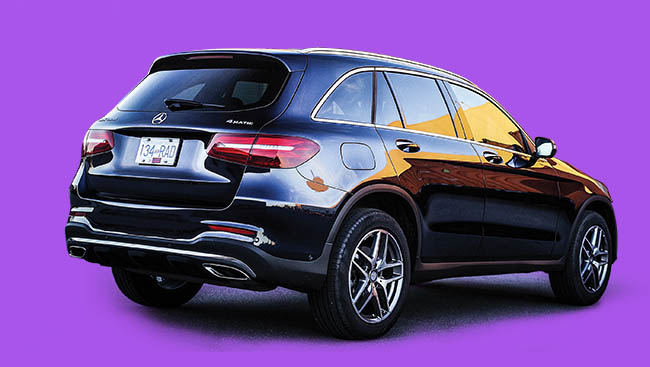 Still, getting from 0-100 km/h in less than eight seconds is possible when you throw the Dynamic Select mode in Sport. What this does is it tightens up the suspension, quickens the shifts, and increases throttle response to prioritize performance. If saving fuel is the mission, Eco mode activates the engine start/stop function and turns on a new “sailing” feature that effectively lets the vehicle coast by disengaging the clutch whenever the gas pedal is released.
By default, Comfort mode is on, optimizing the ride to feel smooth and easy, and is what a majority of drivers will likely find themselves using most of the time.
In short, the GLC improves upon the outgoing GLK in almost every way – from its appealing brawny appearance to the manner it behaves on the road, whether you’re out for a Sunday drive or a romp down an empty road.
Highlights (as tested):
MSRP: $44,950
Motor: 2.0-litre turbocharged four cylinder
Horsepower: 241 @ 5,500 rpm
Torque (lb-ft): 273 @ 1,300 rpm
Gearbox: Nine-speed automatic transmission
Layout: Front engine, all-wheel drive
Fuel economy: 13.1 L/100 km mixed city/highway (observed)
Photos: Benjamin Yong
Prev Next