By Benjamin Yong, 24 Nov, 2016
Even though the Infiniti Q50 luxury sports sedan came out only two years ago, the vehicle gets a pretty huge mid-cycle update for 2016. The majority of the changes are internal, with the introduction of no less than three brand new engine offerings, and changes to steering and suspension.
For the purposes of this review, I will be talking about the Q50 2.0t, which is the trim I tested over a one-week period. I’m not going into a lot of detail about the exterior that is largely untouched and looks as handsome as it always has. If it’s the first time you’re laying eyes on the sedan, all the signature Infiniti touches are present, like the double arch grille and wavy “Crescent” shaped C-pillar, to name a couple.

The original Q50 is one of the first cars I sat in containing a forward-thinking infotainment system that wasn’t overly complicated to use. There are two capacitive touchscreens, eight inch on top and seven inch on the bottom, working in tandem displaying different information. In a navigation context, the larger display shows the map, while the smaller is used to type in an address or point of interest.
Getting back to the powertrain, the 2.0-litre turbocharged four-cylinder model DARPAN was lent is the most modest of the new trio, rated at 208 horsepower and 258 lb-ft of torque. In comparison, the remaining motors are both 3.0 L bi-turbo V6s generating either 300 or 400 horses. Every version receives all-wheel drive.
Turning the key, the boosted 2.0t – the engine block is made from aluminum to save weight – comes to life with little fanfare. The peppy little powerplant moves the car fairly well, and I don’t have a whole lot to say about the performance. More noteworthy, in my opinion, is the next-generation Direct Adaptive Steering (DAS) improving upon an already excellent feature. 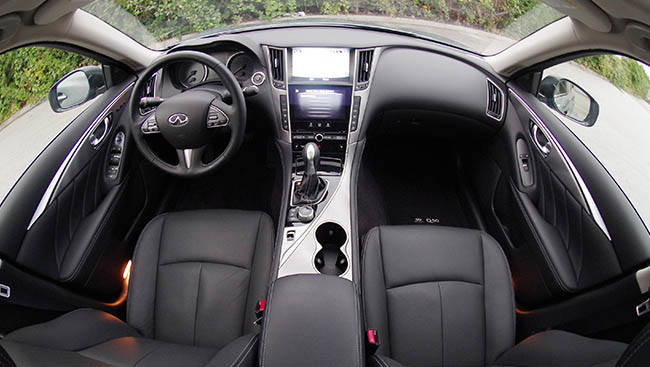 DAS tailors the steering feel to real-world conditions. When driving in the city or parking, the wheel is automatically adjusted so less effort is required to manoeuvre. If the vehicle is travelling over bumpy terrain, the annoying jarring sensation usually felt is mitigated and fatigue is reduced. Carving canyon roads? Response instantly firms up to provide the confidence needed to navigate through higher G-forces and speeds.
An additional interesting function of DAS is the ability to keep the Q50 between lane markers when severe crosswinds or uneven road surfaces are encountered.
Stepping up to the V6s bundles the complementary Dynamic Digital Suspension (DDS). Say you have DAS tuned into Sport or Sport+ mode in anticipation of some tasty twisty stretches on the highway. With DDS equipped, the shock absorbers also stiffen, so the car feels more agile and stays flat around corners. The dampers are smart, too, because the computer quietly monitors and compensates for body roll, pitch and bounce rate to produce the best ride possible. 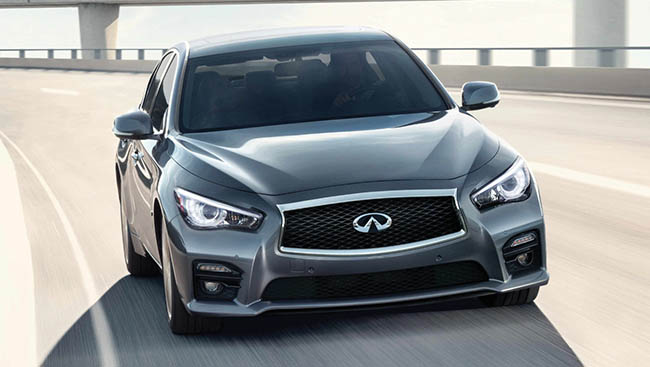 Given the smaller displacement, I was hoping for fuel consumption to be better than the 12.1 L/100 km experienced, especially since an idle start-stop system is now included. Admittedly, most of my driving happened in the city, where the manufacturer estimate is listed at 10.6 L/100 km.
Highlights (as tested):
MSRP: $47,895
Motor: 2.0-litre turbocharged four cylinder
Horsepower: 208 @ 5,500 rpm
Torque (lb-ft): 258 @ 1,500 rpm
Gearbox: Seven-speed automatic
Layout: Front engine, all-wheel drive
Fuel economy:  12.1 L/100 km mixed city/highway (observed)
Prev Next